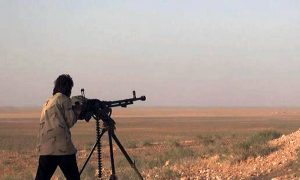 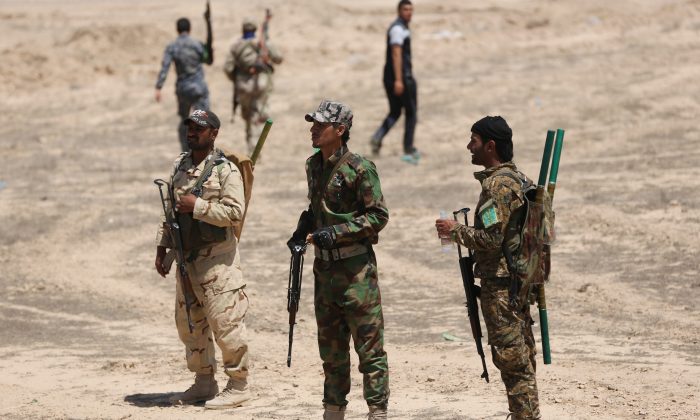 Fighters from the Badr Brigades Shiite militia patrol at the front line, in Kessarrat, located (70 kilometers) north west of Baghdad, Iraq, Friday, June 12, 2015. Despite concerns over heightened sectarian strife, Shiite militiamen continue to pour into Iraqs Anbar province with the hope of recapturing the city of Fallujah from the Islamic State group. As the U.S. prepares to send an additional 450 trainers to Iraq, the Iranian-backed militias say that coalition assistance only hurts their efforts, contradicting statements by the Iraqi government that more international support is needed. (AP Photo/Hadi Mizban)
Middle East

KESSARRAT, Iraq—Ali Ahsan paced back and forth carrying a rifle more than half his height in the searing heat as his militia convoy made a pit stop in the Anbar desert to rest and pray.

Unlike the rugged men in fatigues around him, his prepubescent face has barely sprung a whisker. Now that school is out, the petite 14-year-old is spending his summer break fighting the Islamic State group with his father and other members of Iraq’s Popular Mobilization Forces, which includes the Shiite militias.

“I’m here because it’s my duty,” the stone-faced boy in blue jeans said, referring to an edict from Iraq’s highest Shiite religious authority last year. “The Popular Mobilization Forces are not sectarian forces. They represent all of Iraq, and I want to help them liberate Iraq.”

Despite concerns over heightened sectarian strife, Shiite militiamen continue to pour into Iraq’s Sunni heartland of Anbar province with the initial hope of recapturing Fallujah, the first major Iraqi city to fall to the Islamic State group last year.

As the U.S. prepares to send an additional 450 personnel to Iraq, the Iranian-backed militias say that coalition assistance only hurts their efforts, contradicting statements by the Iraqi government that more international support is needed.

IS fighters captured Anbar’s provincial capital of Ramadi last month, prompting Defense Secretary Ash Carter to lament that the U.S.-trained Iraqi troops lacked “the will to fight.” The Popular Mobilization Forces were called to battle in Anbar after the fall of Ramadi, despite concerns that their involvement in the province would antagonize the Sunni population, and they are now setting their sights on Fallujah.

“We think the liberation of Fallujah will allow us to enter Ramadi without any fighting, so the battle that we are preparing is the battle of Fallujah,” Hadi al-Amiri, the head of the Popular Mobilization Forces, told journalists Friday at an outpost on the Salahuddin-Anbar border. “God willing, it will be imminent.”

President Barack Obama’s decision to expand the U.S. force of more than 3,000 soldiers already in Iraq followed his acknowledgement earlier this week that Washington still lacks a “complete strategy” for training Iraqi forces to fight the Islamic State. A U.S.-led coalition has launched more than 1,900 airstrikes in Iraq since August 2014 to mixed results.

Many of the Shiite fighters, including Ahsan and his uncle, Salah Mahdi, believe that airstrikes have been a hindrance to their efforts to recapture territory — and in some cases, have been deadly.

“We know of Hashd al-Shaabi fighters who were killed by the American planes,” Mahdi said, using the commonly known Arabic name for the Popular Mobilization Forces. “If they really wanted to help us, then they would leave Iraqis to liberate Iraq by themselves.”

Noting the increased number of U.S. advisers, trainers, logisticians and security personnel, al-Amiri scoffed at the notion that an additional “450 experts will be able to win the battle.”

While there are no official estimates for the size of the Popular Mobilization Forces, they are now believed to make up the majority of fighters in Iraq, outnumbering the official Iraqi military, which virtually crumbled in the face of the militant onslaught last year.

A number of the individual militias have said Iranian advisers arm and train their fighters, but officially the Popular Mobilization Force can only receive aid from the Iraqi government, leaving the U.S. somewhat at a loss for how to deal with them.

In Anbar itself, red and green flags with the operation’s slogan — “Labaik ya Hussein,” or “At your command, Hussein” — flap in the wind and dust alongside posters hailing the Popular Mobilization Forces. The slogan is in honor of the Prophet Mohammed’s grandson, Imam Hussein, who was killed in the 7th century battle that led to the schism between Shiite and Sunni Muslims.

The slogan was dubbed “unhelpful” by the Pentagon last month, but the Popular Mobilization Forces dismissed any notions of sectarianism, saying the Imam Hussein is revered by all Muslims.

“I am not a member of any militia,” said Saif Majid, 23, a taxi driver from Baghdad who joined last year when al-Sistani called on Iraqis to defend the country. “We are all brothers — Sunnis, Shiites, everyone.”

As for whether the operation will yield success quickly, Ahsan is hopeful.

“God willing,” the teenager said. “I have to go back in school in September.”