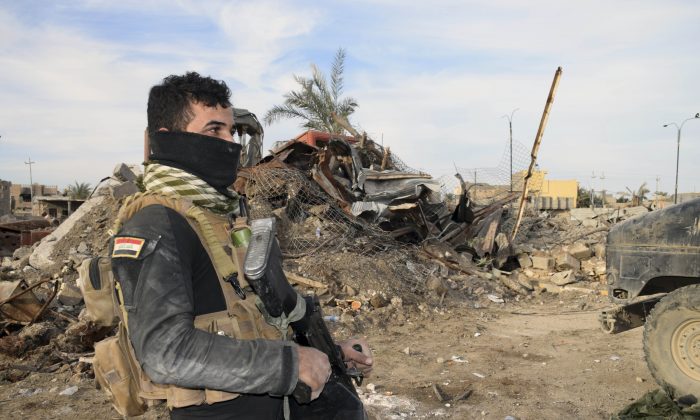 BAGHDAD—Iraqi forces backed by U.S.-led airstrikes drove Islamic State (ISIS) militants out of the center of Ramadi on Monday and seized the main government complex there, according to military officials, who said insurgents are still dug into pockets of the city west of Baghdad.

Ramadi, the provincial capital of the sprawling Anbar province, fell to ISIS in May, marking a major setback for Iraqi forces and the U.S.-led campaign. Ramadi and nearby Fallujah, which is controlled by ISIS, saw some of the heaviest fighting of the eight-year U.S. intervention in Iraq.

In recent months Iraqi forces launched several offensives to retake Ramadi, but all had stalled. Iraqi troops began advancing into some parts of the city, located about 130 kilometers (80 miles) west of Baghdad, earlier this month. But their progress was slowed by snipers, booby traps and the militants’ destruction of bridges leading into the city center.

The heavy fighting and limited access to front-lines made it difficult to follow the troops’ progress, and Iraqi officials issued a string of sometimes contradictory statements.

Brig. Gen. Ahmed al-Belawi told The Associated Press that ISIS militants stopped firing from inside the government complex at around 8 a.m. Monday and said troops were encircling it as engineering teams cleared booby traps.

But Gen. Ismail al-Mahlawi, head of military operations in Anbar, quickly clarified that Iraqi forces had only retaken the government complex and that parts of the city remained under ISIS control. He said ISIS fighters still control 30 percent of Ramadi and that government forces do not fully control many districts from which ISIS fighters have retreated.

“The troops only entered the government complex,” al-Mahlawi told The Associated Press. “We can’t say that Ramadi is fully liberated. There are still neighborhoods under their control and there are still pockets of resistance.”

Iraqi state TV showed troops, some waving Iraqi flags and others brandishing machine guns, chanting and dancing inside what it described as the government complex. Soldiers could be seen slaughtering sheep in celebration near heavily damaged buildings.

Col. Steve Warren, a U.S. military spokesman in Baghdad, told AP that “today’s success is a proud moment for Iraq.”

“The clearance of the government center is a significant accomplishment and is the result of many months of hard work by the Iraqi army, the counterterrorism service, the Iraqi air force, local and federal police, and tribal fighters,” Warren said.

He said the U.S.-led coalition has carried out more than 630 airstrikes, in addition to training security forces and providing both advice and equipment to clear bombs and booby traps.

“Coupled with other recent ISIL losses across Iraq and Syria… the seizure of the Government Center clearly demonstrates that the enemy is losing momentum as they steadily cede territory,” he said in a statement, using another acronym for the Islamic State.

An Iraqi military officer told the AP that the militants had retreated from the government complex to other parts of the city.

“We were totally surprised today,” the officer said, speaking on condition of anonymity because he was not authorized to brief the press.

“We didn’t expect them to retreat from a number of Ramadi areas today, where we entered without any resistance, as if they evaporated,” he said.

Al-Belawi said the fighters retreated mainly to the eastern neighborhoods of Sijariya and Sufiya. Authorities did not provide casualty figures from the fighting.

The recapture of the government complex should lift the morale of Iraqi forces, who were badly shaken by the fall of the city in May, which came despite months of U.S.-led airstrikes and advances against ISIS elsewhere in the country.

Iraqi Prime Minister Haider al-Abadi delivered a speech in which he hailed the advance, saying it had killed “hundreds” of militants and “fulfilled the promise to defeat Daesh in Ramadi,” referring to the Islamic State by its Arabic acronym. He said 2016 would be “the year of the final victory and the end of the existence of Daesh on Iraqi territory.”

“While Ramadi is not yet fully secure and additional parts of the city still must be retaken, Iraq’s national flag now flies above the provincial government center and enemy forces have suffered a major defeat,” he said in a statement.

ISIS still controls much of northern and western Iraq, as well as vast swaths of neighboring Syria. It has declared a caliphate in the areas under its control and imposed a harsh and violent interpretation of Islamic law.

Ramadi and Fallujah, Sunni Arab cities where distrust of the Shiite-led government runs deep, were major bastions of the insurgency in the years after the 2003 U.S.-led invasion. The capture of Ramadi would be a major victory for Iraqi troops, but would also test the government’s ability to bridge the country’s sectarian divide.