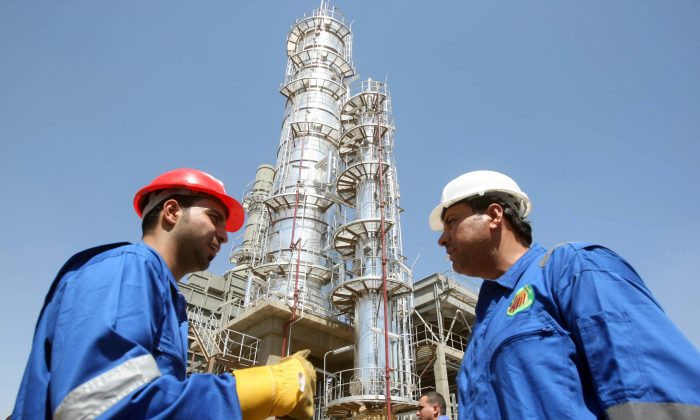 Iraqi workers stand outside the second refinery for crude oil in the Al-Dora refinery complex during its official opening ceremony in Baghdad on Sept. 16, 2010. A boom in oil investment and exports is fueling economic growth attracting foreign companies and capital. (Ahmad Al-Rubaye/AFP/Getty Images)
Business & Economy

The contrast between life and business is extreme in Iraq. On the one hand, hundreds of people still die every month from terrorist attacks. On the other hand, business and investment are flourishing. The most recent success: Citigroup will be the first American bank to open a branch in Iraq, slated for sometime this year.

“U.S. companies, such as Citi, are demonstrating tremendous commitment to Iraq. Our companies bring capital and expertise, world-leading technology, and innovative management and financing practices,” said Stephen Beecroft, the United States ambassador to Iraq, at a reception June 26, 2013, according to Iraq Business News. Along with the planned bank branch in Baghdad, Citigroup is talking about $1 trillion in infrastructure investment

Mayank Malik, chief executive officer for Citigroup for Jordan, Iraq, Syria, and the Palestinian territories told Bloomberg news: “Iraq is a giant that’s waking up and the opportunities are immense… The most significant opportunities are twofold—oil revenue generation and infrastructure creation. We estimate this to be a $1 trillion initiative over time.”

In Iraq, economic development mainly centers on oil exploration and production. According to the International Monetary Fund (IMF), the country has the second largest oil reserves in the world. An estimated 143 billion barrels are in the ground in Iraq; the country produced 3.1 million barrels per day in 2012. Exports amounted to 2.1 million, according to the Ministry of Oil.

Investment in oil and infrastructure and the knock-on effects will boost economic growth to 9 percent this year, according to the IMF; much faster than the global average of 2 percent. In turn, the government has increased budget spending by 18 percent to $118 billion.

The IMF also states Iraq needs further reconstruction and investment in social institutions such as education, security and health care to provide a better business environment. Most of this estimated $1 trillion expansion will be funded by bank loans.

Consequently, as economic prospects get better, international banks are entering a market where large profits are expected. According to Singapore-based Sansar Capital Management LLC, the five largest private banks in Iraq increased their net-income by more than 200 percent from 2010 to 2012.

In addition to Citigroup, British bank Standard Chartered is also going to open branches in the cities of Baghdad, Basra and Erbil this year. “The amount of economic activity in Iraq now is substantial. We always wanted to be onshore in Iraq. It was never a question of if but a question of when,” the bank’s regional head Christos Papadopoulos told Reuters.

Despite the positive long-term outlook, it’s not going to be easy, notes the IMF:  “Iraq’s economic prospects continue to be subject to significant risks, deriving mainly from institutional and capacity constraints, oil prices volatility, delays in the development of oil infrastructure, and an extremely fragile political and security situation.”