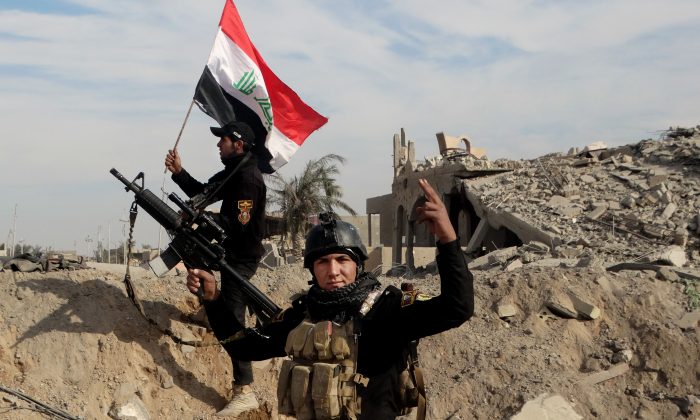 BAGHDAD—Iraqi officials hailed on Wednesday the progress achieved by government troops on the second day of a military operation aimed at dislodging ISIS extremists from a key area north of the capital, Baghdad.

On Tuesday, Iraqi troops, backed by aerial support and paramilitary forces, launched a new push to retake a sprawling desert area outside the central city of Samarra, 95 kilometers (60 miles) north of Baghdad, with the aim to cut ISIS supply lines and to tighten the grip around the ISIS-held northern city of Mosul.

“We have achieved a big success,” the commander of the Iraqi Air Force, Staff General Hamid al-Maliki, said in a video distributed by the Defense Ministry adding that government forces had progressed farther than expected so far. He hailed the paramilitary forces, which are mainly composed of Shiite militiamen, as playing “a big role” alongside government security forces.

The spokesman of Iraq’s counter-terrorism forces, Sabah al-Numan, told The Associated Press that the militants dispatched seven suicide car bombers, but they were destroyed by security forces before reaching their targets. Al-Numan added that two militant operations centers were bombed and a train station was recaptured.

Meanwhile, the United Nations said that continuous violence has left at least 670 Iraqis dead in February, of whom about two-thirds were civilians.

In a statement issued on Tuesday, the U.N. Assistance Mission for Iraq, known as UNAMI, put the number of the killed civilians at 410, a figure which according to U.N. methodology includes the federal police, civil defense forces and personal security details. The rest were security forces, including Kurdish peshmerga and paramilitary troops.

It added that a total of 1,290 people were wounded, including 1,050 civilians. The worst affected area was Baghdad, with 277 civilians killed and 838 injured.

10 Years On, Iraq Scarred From Attack on Shiite Shrine

Citing its local health authorities, the U.N. said at least four civilians were killed and 126 others wounded in the western province of Anbar, which has large areas under ISIS group control. The U.N said it could not fully verify the Anbar figures due to the increased volatility of the situation on the ground and the disruption of services.

In January, overall causality figures were at least 849 killed and 1,450 wounded.

“This conflict continues to exact a heavy toll on the population,” the U.N. Special Representative for Iraq, Jan Kubis, said in the statement. “This is deeply worrying and disheartening. Civilians should not pay the price in this conflict,” Kubis added.

February saw significant deterioration in Iraq’s security situation, with two massive bombings in as many days by ISIS  in the town of Muqdadiyah and in Baghdad that killed at least 110 people.

ISIS seized much of northern and western Iraq, including the second largest city, Mosul, in the summer of 2014. The extremists have declared a caliphate in the areas of Iraq and Syria under their control and have imposed a harsh and violent version of Islamic law.

With heavy backing from U.S.-led coalition airstrikes, Iraqi troops scored key victories against ISIS since last year. But a long-awaited campaign to retake Mosul, the main city held by the militants, has yet to begin.