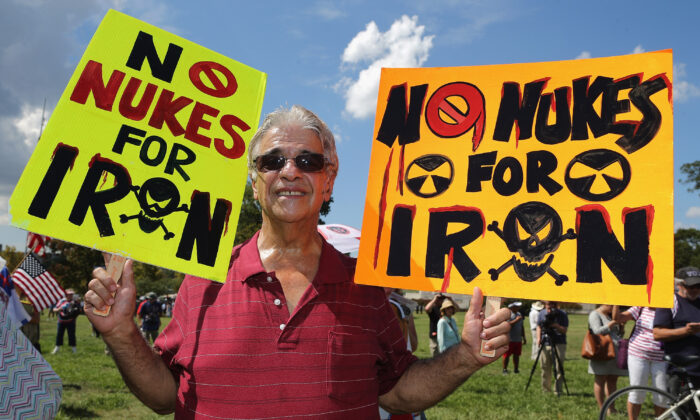 Protesters gather on the West Front Lawn for a rally against the Iran nuclear deal at the U.S. Capitol in Washington on Sept. 9, 2015. (Chip Somodevilla/Getty Images)
Viewpoints

Conventional wisdom—and the Biden administration—says a new Iran deal is necessary before the Islamic Republic creates a nuclear weapon. And, in fact, Iran has close to enough uranium to build at least a single atomic weapon.

The International Atomic Energy Agency (IAEA) says Iran has exceeded by “many times” the amount of enriched uranium permitted under the nuclear agreement reached in 2015. We have to hurry, then, before Tehran gets a bomb. Right?

Iran’s actual strategy is, in fact, quite different, seeking to build a significant nuclear arsenal before it reveals it has one. Iran is doing precisely that and getting away with it under the eyes of world leaders who say they oppose Iran having nuclear weapons at all.

There are different ways to build a nuclear bomb. By far the simplest is to assemble enough enriched uranium—known as U-235—and have it exploded by a simple gun-type mechanism. The atomic bomb dropped by the United States on Hiroshima was a uranium-fueled bomb that caused massive destruction, killing 60,000 people immediately and wounding another 69,000 (many of whom would die of radiation poisoning).

Nuclear bombs can also be made from plutonium that can be produced by a nuclear reactor. These require a more complex and sophisticated triggering mechanism.

Uranium 235 can be “boosted” by plutonium, which may be the path Iran is on. Boosted weapons were produced by the United States in the 1950’s and may be what the North Koreans demonstrated in an underground test on Sept. 3, 2017. That bomb was assessed to be 120 KT. By contrast the Hiroshima bomb was probably 15 KT.

Bombs like the early U.S. weapons and the North Korean underground blast use what is called a composite core. This method requires less enriched uranium and only a small amount of plutonium.

It is unlikely that Iran would want only one nuclear weapon because the first time Iran tests its capabilities, Israel will attack and seek to destroy Iran’s nuclear facilities. As Israel has extraordinary intelligence on Iran’s nuclear program and has most probably already tried to destroy some of Iran’s facilities through covert action, the Iranians need a large enough arsenal that Israel can’t hope to get all of it.

This means Iran needs to build a significant arsenal before it reveals it has nuclear weapons—probably a dozen or more nuclear devices plus delivery systems. If this assessment is correct, Iran is following North Korea’s program, but with a twist.

Iran does not have the ability to protect its nuclear program, so while its goal is to assemble an arsenal similar to the North Korean one, it needs to do it under the table until the full arsenal’s capability is in hand.

Iran has between twelve and twenty nuclear reactors or complexes associated with nuclear weapons development. Many of them are not monitored by the IAEA. In addition to the extensive nuclear-bomb-related facilities within Iran, Iran and North Korea have also attempted to build a nuclear reactor complex based on the North Korean Yongbyon design at al Kibar in a remote desert area in Syria.

Israel destroyed the reactor then under construction in September 2007. The reactor was to support Syria’s nuclear ambitions, but it was also an important demonstration of Iranian and North Korean nuclear cooperation.

The Joint Comprehensive Plan of Action (JCPOA) “agreement” the Biden administration is seeking to rejoin and/or expand does not cover ballistic missiles.

Iran and North Korea cooperate very closely on a variety of ballistic missiles and Iran has shared with North Korea a nose cone triconic design (designated NRV by Tal Inbar and Uzi Rubin) that is a reentry vehicle for a nuclear warhead, something North Korea lacked. The Iranians have adapted this nose cone design to the Shahab-3, a medium range ballistic missile with a range of 1,300 miles that is an evolution of the North Korean No Dong 1 (aka Hwasong-1). No Dong also formed the basis of Pakistan’s Hatf-7 Ghauri nuclear missiles.

The JCPOA does not halt Iranian cooperation with other countries such as Pakistan, North Korea, China, or Russia.

The JCPOA does not cover warhead designs, fusing systems or weapon arming mechanisms, while the IAEA also reports that the Iranians have been working on special fusing and arming mechanisms for the Shahab-3 warhead.

Iran also runs a very large-scale smuggling operation where it seeks to acquire military and nuclear technology. As recently as September, Germany arrested a German-Iranian man illegally shipping equipment for nuclear weapons and missiles who operated out of at least 11 locations. This is not mentioned in the JCPOA either.

Iran has been cheating on its nuclear program commitments since long before the JCPOA was signed in 2015. By now it is well established that the JCPOA had no significant effect when it was in force and the Trump administration withdrawal from the pact made little difference.

At this point, the Iranians are too far advanced in their nuclear weapons program to allow a new, different or enhanced agreement to effectively slow it down.

A new JCPOA would only provide a cover for Iran’s attempt to build a number of nuclear warheads and a reason (at least in the interim) for the United States and the other signatories to oppose any attempt to attack Iran’s nuclear facilities. (That may be the real idea behind Biden’s effort!)

Instead of worrying about a renewed and worthless JCPOA it would be better to consider active measures to deal with Iran’s emerging arsenal.