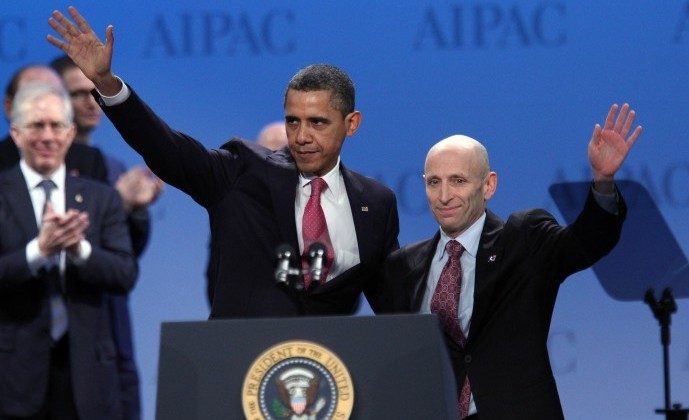 President Barack Obama waves with Lee Rosenberg, president of the American Israel Public Affairs Committee (AIPAC) after speaking at their annual conference in Washington, D.C., March 4. Obama reaffirmed his strong backing for key ally Israel, warning Iran that he would not hesitate to use force, if required, to stop it developing a nuclear weapon. (CHRIS KLEPONIS/AFP/Getty Images)
US

A day before he was set to meet with Israeli Prime Minister Benjamin Netanyahu, President Obama addressed an estimated 13,000-member audience at the American Israel Public Affairs Committee’s (AIPAC) annual conference, where Iran and its nuclear ambitions were the primary focus of his remarks.

The president assured members of the audience that his administration would stand firmly behind Israel in any potential confrontation with Iran, emphasizing his belief that the alliance between the United States and Israel was built on the strong foundations of common interests and values.

“We are bound to Israel because of the interests that we share-in security for our communities, prosperity for our people, and new frontiers of science that can light the world. But it is our common ideals that provide the true foundation for our relationship,” President Obama said.

“That is why America’s commitment to Israel has endured under Democratic and Republican presidents, and congressional leaders of both parties. In the United States, our support for Israel is bipartisan, and that is how it should stay,” he concluded.

Obama reiterated his stance that “all elements of American power”–including military force–would be on the table to prevent Iran from obtaining a nuclear weapon, although he has repeatedly insisted that a military strike against Iran would do little more than merely delay the Iranian nuclear program.

At the same time, the president also made a plea for Israel and her supporters to give diplomacy and economic sanctions a chance and refrain from bellicose rhetoric.

“Already, there is too much loose talk of war. … For the sake of Israel’s security, America’s security, and the peace and security of the world, now is not the time for bluster; now is the time to let our increased pressure sink in, and to sustain the broad international coalition that we have built,” he said.

Also speaking at the conference was Israeli President Shimon Peres, who holds a largely ceremonial post within the Israeli government. Peres gave Obama a warm reception, saying that “[Israel and her supporters] have a friend in the White House,” while reserving his harsher words for the Iranian regime.

“Iran’s ambition is to control the Middle East, so it can control a major part of the world’s economy. It must be stopped. And it will be stopped,” said Peres.

Peres also emphasized his belief that Israel and the United States have closed ranks on the Iranian issue and that he had faith that the two nations would act in unison from this point forward.

“President Obama made it clear that the U.S. will not permit Iran to become nuclear. That containment is not a sustainable policy; all options are on the table. The United States and Israel share the same goal—to prevent Iran from developing a nuclear weapon.

“There is no space between us,” Peres stated.

President Obama and Prime Minister Netanyahu will hold a summit at the White House on Monday. Netanyahu is expected to push the president to take a harder line against Iran, asking him to be more explicit about the circumstances under which his administration would undertake a military operation against the Islamic Republic in support of Israel.

Israeli government officials are currently demanding that Iran put an immediate stop to all enrichment of uranium, and that U.N. inspectors be allowed into the country to verify the suspension.

The Obama administration has disagreed with that course of action, arguing that Iran would never agree to such a suspension and that the demand would only serve to doom negotiations before they even began.

The White House has insisted that it will continue its policy of pressuring Tehran with economic sanctions, keeping the military option open as a last resort.

Iranian leaders, for their part, have always insisted that their nuclear program is for legitimate, peaceful energy purposes only.