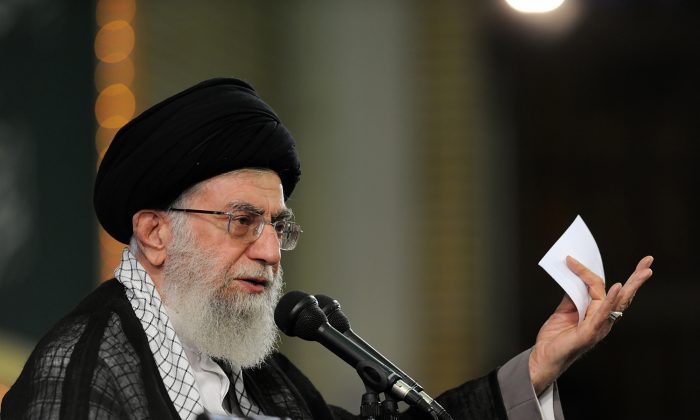 Tehran seems determined to demonstrate that the nuclear agreement struck by the Obama administration will not alter the nature of the Iranian regime one whit.

President Obama’s proffered, outstretched hand to Iran, as proposed before the 2008 presidential election, has been repaid with a poke in the eye.

Iranians today are still encouraged, as they have been for 30 years, to chant “death to America” (though this supposedly refers to U.S. policy, not the American people—wink, wink).

Overall, the regime is promoting a new surge of anti-American sentiment.

This targeting of the United States is connected with a new crackdown on the media. Independent journalism is as dangerous an occupation in Iran as it ever was, and according to the organization Reporters Without Borders, four Iranian journalists were arrested on Nov. 2.

As “reported” by the Revolutionary Guard “news agencies” Tasnim and Fars, the journalists were charged with being “members of an illegal network linked with the governments of the United States and Britain who were active in Iranian media.”

The four journalists arrested were: Afarine Chitsaz of the daily Iran; Ehssan Mazandarani, editor of the daily Farhikhteghan; Saman Safarzai of the monthly Andisher Poya; and Issa Saharkhiz, a well-known independent journalist who used to edit several reformist newspapers.

Though Iran media saw a slight thaw during the regime of Mohamad Khatami, it came to an end in 2000 when Supreme Leader Ayatollah Khamenei had more than 300 media outlets closed and 500 journalists arrested.

Though Iran media saw a slight thaw during the regime of Mohamad Khatami, it came to an end in 2000 when Supreme Leader Khamenei ordered a renewed crackdown. Since then, more than 300 media outlets have been closed and 500 journalists and Internet activists arrested and jailed.

One of the more well-known is Jason Rezaian, bureau chief for The Washington Post, who is in prison in Tehran charged with espionage. Iran is ranked 173 in Reporters Without Borders’ World Press Freedom index and receives a rating of “not free.”

Those in Washington—or Europe, for that matter—who thought Iran would change its stripes as a result of lifted sanctions and international engagement have just received a dose of cold water.

Helle C. Dale is The Heritage Foundation’s senior fellow in public diplomacy. Copyright The Daily Signal. This article was previously published on DailySignal.com