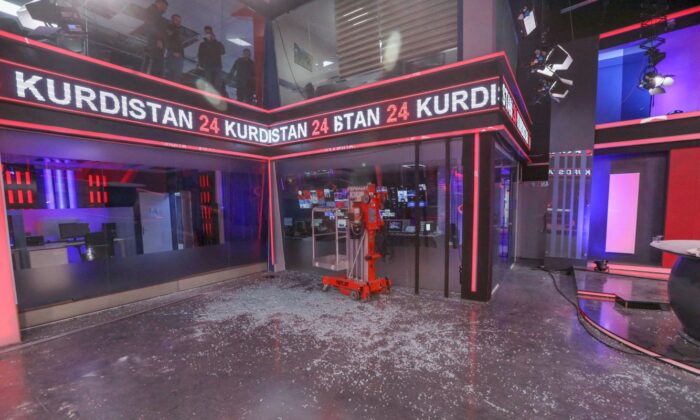 The damaged studio at the Kurdistan 24 TV building, after an overnight attack in Arbil, the capital of the northern Iraqi Kurdish autonomous region, on March 13, 2022. (Safin Hamed/AFP via Getty Images)
Middle East

In a press briefing, Sullivan said the United States condemns the attack “in the strongest terms” and that the barrage of missiles had targeted a civilian residence in Erbil, the capital of Iraqi Kurdistan, “without any justification.”

No injuries or deaths have been reported from the attack.

“The United States stands with Prime Minister Kadhimi and the leaders of the Kurdistan Region, President Nechirvan Barzani, and Prime Minister Masrour Barzani, in condemning this assault on the sovereignty of Iraq and its Kurdistan region,” Sullivan said. “We will support the Government of Iraq in holding Iran accountable, and we will support our partners throughout the Middle East in confronting similar threats from Iran.”

“The United States of America stands behind the full sovereignty, independence, and territorial integrity of Iraq,” Sullivan added.

Officials in Kurdistan, a semi-autonomous region, confirmed the missiles were fired late on March 12.

Just a day later on March 13, Iran’s Revolutionary Guard claimed responsibility for the attack, which it said was in retaliation for Israel’s recent crimes, including an airstrike in Syria the previous week in which two Revolutionary Guard officers were killed.

“Once again, we warn the criminal Zionist regime that the repetition of any evil act will draw harsh, decisive, and devastating responses,” the Revolutionary Guard said, referencing the government of Israel.

Iranian state media described the target as an Israeli “strategic center,” while another outlet claimed that it was operated by Mossad, Israel’s intelligence agency.

Meanwhile, the Fars News Agency, which is managed by Iran’s Revolutionary Guard Corps, appeared to suggest that the attack was linked to a January 2020 airstrike ordered by then-President Donald Trump, which killed the regime’s top Iranian military commander, Qasem Soleimani.

“Missiles hit the ‘Israeli-American’ bases at 01:20 local time; ‘that’s not a coincidence.’ IRGC-QF chief Soleimani was killed in #Iraq on 7Jan20—01:20 Iraq time,” the news agency wrote in a Twitter post.

“I strongly condemn the terrorist attack on Erbil and call on its resilient people to keep calm and follow the guidance of the security services,” Kurdistan Prime Minister Masrour Barzani said after the attack.

“We call on the United Nations, the United States, the European Union, the Arab League, the federal government, the Iraqi parliament, and the Iranian government to urgently investigate these baseless attacks,” the Kurdistan regional government wrote on social media.

Negotiations in Vienna over the deal have reportedly been paused due to Russian demands about sanctions targeting Moscow in response to its ongoing invasion of Ukraine.

Moscow reportedly demanded guarantees from the United States that Western sanctions against Russia will not affect the country’s rights to economic trade with Iran under the nuclear deal.

Speaking on March 5 about the negotiations, Russian Foreign Minister Sergei Lavrov cited the “avalanche of aggressive sanctions that the West has started spewing out” over Russia’s invasion of Ukraine, according to The Moscow Times.

Josep Borrell Fontelles, the European Union’s foreign policy chief, said in a March 11 Twitter post that although negotiations were paused, “a final text is essentially ready and on the table.” He added that officials will continue to work to “overcome the current situation and to close the agreement.”

In early February 2022, the Biden administration waived several sanctions related to Iran’s civilian nuclear activities. The move was an effort to entice Iran back to the 2015 nuclear deal. The United States withdrew from the 2015 deal under former President Donald Trump, who then imposed tight sanctions on Iran.

However, a number of lawmakers have argued against lifting those sanctions.

Sen. Tom Cotton (R-Ark.) warned on March 13 that “sanctions relief for Iran’s terrorist regime should be completely off the table,” adding that “Iran is openly targeting Americans with missile strikes.”