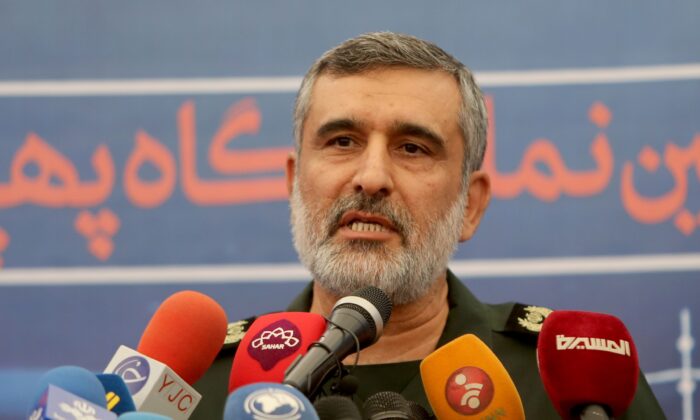 General Amir Ali Hajizadeh, the head of the Revolutionary Guard's aerospace division, speaks at Tehran's Islamic Revolution and Holy Defence museum, during the unveiling of an exhibition of what Iran says are US and other drones captured in its territory, in the capital Tehran on Sept. 21, 2019. (Photo by Atta Kenare/AFP via Getty Images)
Middle East

An Iranian Revolutionary Guard commander says his unit accepts “full responsibility” for the accidental shooting down of a Ukrainian passenger plane.

In an address broadcast by state TV on Saturday, Gen. Amir Ali Hajizadeh said that when he learned about the downing of the plane, which killed all 176 passengers on board, “I wished I were dead.”

Iran’s armed forces say they mistook the passenger plane for a hostile target in the tense aftermath of Iran’s ballistic missile attack on two military bases in Iraq housing U.S. troops. That attack was retaliation for the killing of Iran’s top general, Qassem Soleimani, in an American airstrike in Baghdad.

Iran on Saturday acknowledged that its armed forces “unintentionally” shot down the Ukrainian jetliner that crashed earlier this week after the government had repeatedly denied Western accusations that it was responsible.

The plane was shot down early Wednesday, hours after Iran launched a ballistic missile attack on two military bases housing U.S. troops in Iraq. No one was wounded in the attack on the bases.

A military statement carried by state media said the plane was mistaken for a “hostile target” after it turned toward a “sensitive military center” of the Revolutionary Guard. The military was at its “highest level of readiness,” it said, amid the heightened tensions with the United States.

“In such a condition, because of human error and in an unintentional way, the flight was hit,” the military said. It apologized and said it would upgrade its systems to prevent future tragedies.

Those responsible for the strike on the plane would be prosecuted, the statement added.

Iran’s supreme leader, Ayatollah Ali Khamenei, expressed his “deep sympathy” to the families of the victims and called on the armed forces to “pursue probable shortcomings and guilt in the painful incident.”

Ukraine’s President Volodymyr Zelensky issued a statement saying the crash investigation should continue and the “perpetrators” should be brought to justice. He said Iran should compensate victims’ families, and he requested “official apologies through diplomatic channels.”

Iran’s acknowledgement of responsibility for the crash was likely to inflame public sentiment against authorities after some Iranians had rallied around their leaders in the wake of Soleimani’s killing.

The majority of the plane crash victims were Iranians or Iranian-Canadians. Iranian officials had repeatedly ruled out a missile strike, dismissing such allegations as Western propaganda that officials said was offensive to the victims.

The United States and Canada, citing intelligence, said they believed Iran shot down the aircraft with a surface-to-air missile, a conclusion supported by videos verified by The Associated Press.

The plane, en route to the Ukrainian capital of Kyiv, was carrying 167 passengers and nine crew members from several countries, including 82 Iranians, 57 Canadians and 11 Ukrainians, according to officials. The Canadian government had earlier lowered the nation’s death toll from 63.

“This is the right step for the Iranian government to admit responsibility, and it gives people a step toward closure with this admission,” said Payman Parseyan, a prominent Iranian-Canadian in western Canada who lost a number of friends in the crash.

“I think the investigation would have disclosed it whether they admitted it or not. This will give them an opportunity to save face.”

Iran’s acknowledgement of responsibility was likely to renew questions of why authorities did not shut down the country’s main international airport and its airspace after the ballistic missile attack, when they feared U.S. reprisals.

It also undermines the credibility of information provided by senior Iranian officials. As recently as Friday, Ali Abedzadeh, the head of the national aviation department, had told reporters “with certainty” that a missile had not caused the crash.

On Thursday, Cabinet spokesman Ali Rabiei dismissed reports of a missile, saying they “rub salt on a painful wound” for families of the victims.

Iran had also invited Ukraine, Canada, the United States, and France to take part in the investigation of the crash, in keeping with international norms. The Boeing 737 was built in the United States and the engine was built by a U.S.-French consortium.

Ukraine’s president said its team of investigators, who are already on the ground in Iran, should continue their work with “full access and cooperation.”

The military statement, issued by the Joint Chiefs of the Armed Forces, said Guard officials had been ordered to “provide a detailed explanation” to the public.

The semi-official Fars news agency reported that the supreme leader on Friday morning had ordered top security officials to review the crash and announce the results.

Fars, which is close to the Guard, appeared to deflect blame.

“If some individuals, in any position, were aware of the issue but made statements contradicting the reality or hid the truth for any reason, they should be named and tried,” it said.

Others speculated that the security forces may have concealed information from civilian authorities.

“Concealing the truth from the administration is dreadful,” Mohammad Fazeli, a sociology professor in Tehran, wrote on social media. “If it had not been concealed, the head of civil aviation and the government spokesmen would not have persistently denied it.”

“Concealing the truth for three days is dangerous,” he added.

By Nasser Karimi and Joseph Krauss