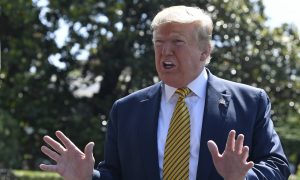 Trump: 'We're Not Going to Have Iran Have a Nuclear Weapon'
0
Share Now
TelegramFacebookTweetEmailTellMeWeReddit
Copy Link 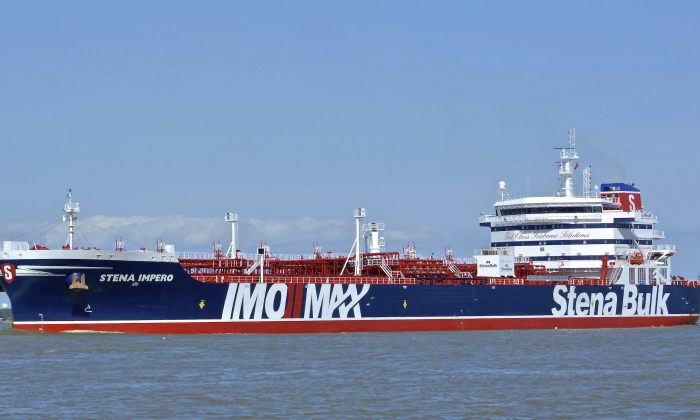 Iran’s flag was seen being hoisted over a British tanker in state television footage on July 21.

The Stena Impero was seized by Iranian forces in the Strait of Hormuz on July 19, sparking warnings from the United Kingdom.

According to the Daily Mail, the video footage appears to have been recorded in Bandar Abbas.

In radio recordings, an Iranian vessel told the Stena Impero to “change course immediately,” adding that “if you obey, you will be safe.”

But a British Navy ship, the HMS Montrose told the Impero: “As you are conducting transit passage in a recognized international strait, under international law your passage must not be impaired, impeded, obstructed or hampered.”

The Iranian patrol vessel then tells the Montrose: “No challenge is intended…. I want to inspect the ship for security reasons.”

The Montrose then rejects the claim and said, “Please confirm that you are not intending to violate international law by unlawfully attempting to board the MV Stena Impero.”

The HMS Montrose was about one hour away from the Impero when it was seized, Defense Secretary Penny Mordaunt told the Mail.

It comes as Stena Bulk, the operator, made a request to visit the 23 crew members on board its seized vessel, Reuters reported.

“I can confirm a formal request for permission to visit the 23 crew members of the Stena Impero has been made to the authorities at the Port of Bandar Abbas,” Stena Bulk President and CEO Erik Hanell said in a statement to the news agency. “The request has been acknowledged, but we await a formal response. In the meantime, we will continue to cooperate and liaise with all appropriate authorities.”

Iran’s ambassador to the U.K. on Sunday said that Iran “is firm and ready for different scenarios.”

The official, Hamid Baeidinejad, tweeted: “UK government should contain those domestic political forces who want to escalate existing tension between Iran and the UK well beyond the issue of ships. This is quite dangerous and unwise at a sensitive time in the region. Iran however is firm and ready for different scenarios.”

British Foreign Secretary Jeremy Hunt says the government plans to spell out its response in a briefing to Parliament on Monday. Officials have said a military response is extremely unlikely and Britain has taken steps to bolster its diplomatic efforts, The Associated Press reported.

British officials say they have no good military options, especially because the tanker is in a secure Iranian port with a heavy military presence. Defense minister Tobias Ellwood on Sunday reiterated calls for a tamping down of tensions.

“Well, firstly we need to try and de-escalate this,” Ellwood told Sky News. “There has been a ratcheting up of tensions in the Middle East.”

Ellwood called the seizure “a hostile act” but conceded that the British Royal Navy “is too small to manage our interests across the globe” and that this would be an issue for the next prime minister to handle.