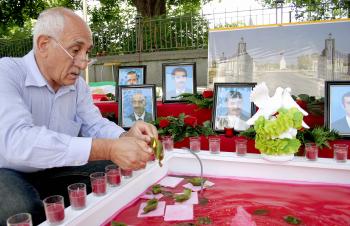 A demonstrator lights candles to commemorate the 14 Iranians killed during the raid on Camp Ashraf. (Samira Bouaou/The Epoch Times)
Canada

OTTAWA—To protest attacks by Iraqi forces on Iranian exiles at Camp Ashraf in Iraq, ten Iranian expatriates have been holding a hunger strike in front of the U.S. Embassy in Ottawa.

The ten, all of whom have family and friends at the camp, have been joined daily by about 100 other Iranians since they began their hunger strike on July 29.

The attacks at Camp Ashraf, home to the People's Mujahideen Organization of Iran (PMOI) dissident group, has left 14 residents dead and about 500 injured, according to camp residents.

The residents in the camp tried to stop the army trucks by forming a human chain. But the Iraqi troops waded into the crowd, hitting people in the head and body with wooden clubs. Shots were also fired.

Numerous videos and still shots have been posted on the Internet showing the residents being clubbed by the troops. The residents did not appear to fight back. Thirty six were arrested. The attack resumed on July 29.

The hunger strikers in Ottawa are waiting for a response to their request that the U.S. government reinstate protection of camp residents and work toward getting the Iraqi government to abandon plans to send them back to Iran or to another country.

They also want the 36 arrested, many of whom were injured in the attacks, to be given medical care and released. U.S. embassy staff has so far not met with the demonstrators or accepted a letter outlining their requests.

“If protection by the U.S. is not given, the people in Ashraf are facing genocide. That is why we will stay here day in and day out, no matter what, to protect them from the genocide,” said Vahideh Khorram-Roudi, one of the hunger strikers.

Supporters have also undertaken hunger strikes in Washington D.C. outside the White House and opposite U.S. embassies in London and Berlin. News reports say some of the hunger strikers are in a poor state of health and have been hospitalized.

Iraqi officials have disputed the details surrounding the attack, blaming rioting and snipers within the camp. According to Human Rights Watch, an Iraqi security commander wounded in the raid told the media that camp residents resisted security forces with stones, knives, and sharp tools.

The PMOI have been designated a terrorist group by the U.S., Iraq and Iran. Camp residents surrendered their weapons to U.S. forces in 2003.

The U.S. protected Camp Ashraf from 2003 until it handed over responsibility for the camp and its 3,500 residents to the Iraqi government in January as part of an initiative to have Baghdad look after Iraq’s security needs.

“The July 29 attack proves that there is no protection for the people in Ashraf and the Iraqi government can’t be trusted to keep their promise to not harm the people,” Khorram-Roudi said.

The Iraqi government has prevented any external agencies from providing aid for camp residents, 1,100 of whom are women. The authorities have also cut off the camp’s water, electricity, and medical supplies.

Iraq wants to close the camp and send the refugees to Iran or another country, although no date for the eviction has been announced. Iran wants them returned to Iran to face charges related to their dissident activities.

The demonstrators believe that repatriating camp residents to Iran would mean certain imprisonment for all and execution for some, given the fact that the PMOI opposes the Iranian theocracy.

Most of the residents in Camp Ashraf, which was established 25 years ago, were dissidents fighting for democracy in Iran under the PMOI. The PMOI was welcomed into Iraq in 1986 by then-leader Saddam Hussein and helped conduct operations against Iran in the Iran-Iraq War.

They also provided the U.S. government with information about Iran’s nuclear arms.

Prime Minister Nuri al-Maliki, who has closer ties with Tehran than did Hussein, met with Iran’s supreme leader Ali Khamenei on February 28. They signed a bilateral agreement to repatriate the Iranians.

In addition to the U.S. embassy, the demonstrators have been spending some of their time in front of the Department of Foreign Affairs and International Trade (DFAIT). Other than accepting a statement, DFAIT has not responded to the group.

At a rally in front of DFAIT on Friday, former MP David Kilgour said Prime Minister Nuri al-Maliki “is ultimately responsible for the grim statistics” among Camp Ashraf's residents.

“This initiative complied with the wish of Iran's supreme leader Ali Khamenei and ignored the views of the many Iraqis who want Iraq to be a sovereign country and to conform to international standards,” he said.

Camp Ashraf residents have been recognized as “protected persons” under the Fourth Geneva Convention since 2004.

The International Committee of Jurists, a group of hundreds of lawyers of which Kilgour is one of three Canadian members, has applied to the Iraqi Embassy and the Iraqi Foreign Minister for permission to enter the country in order see firsthand the condition of the residents.

The committee also wants to press the Iraqi government to live up to its promise to protect the people in Ashraf and not repatriate them to Iran or any hostile country.

For now, the hunger strikers and their supporters vow to continue their vigil in front of the U.S. Embassy and DFAIT, hoping for justice for their family members at camp Ashraf