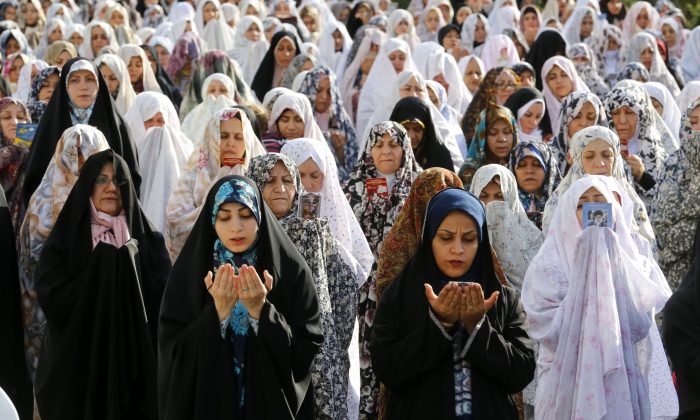 Iran’s minority Sunni Muslims say authorities of the Shiite-majority nation have prevented some Sunnis from holding communal prayers in the capital, Tehran, to mark the Muslim festival of Eid al-Adha.

The Council of Azeri Sunni Prayer Centers in Tehran and the neighboring province of Alborz issued a statement saying Sunnis were prevented from attending prayers for Wednesday’s holiday in four districts of the capital: Khalij-e-Fars, Punak, Resalat and Yaft Abad. The statement appeared in a Thursday report by Iranian state-affiliated news site Shafaqna.

The council said the problems faced by Tehran-based Sunnis wanting to join Eid prayer services were similar to those they have faced in previous years. But it said Iranian authorities permitted Eid services to go ahead in several Sunni prayer centers in Tehran and Alborz.

Iran’s main Sunni news site, Sunni Online, published a Thursday report saying Tehran police blocked Sunni prayers in the four above-mentioned districts by deploying at the entrances of the prayer centers and dispersing worshippers. Such centers often are located in homes of Sunnis or in large rooms of other buildings.

Sunni Online quoted police as saying the order to block the entrances of the Sunni prayer centers came from Tehran’s provincial security council, which is under the authority of Iran’s interior ministry. There was no confirmation of such an order from Iranian officials in state media. But the Iranian government has ordered the closure of several Sunni prayer centers in the country in recent years, alleging they were engaged in extremist activity, an allegation rejected by Sunni community leaders.

Five to 10 percent of Iran’s 82 million people are Sunni Muslims, according to the CIA World Factbook. Iranian Sunnis, whose main concentrations are in the country’s southeast and northwest, long have complained of discrimination by Shiites who make up an estimated 90 to 95 percent of the population.

“As Iran’s diplomatic relations with Sunni Arab powers in the region worsened (in recent decades), its leaders have viewed minority Sunnis as outside of the Iranian social fabric,” said Doshoki, who heads the London-based Center for Balochistan Studies. “So they perceive large Sunni gatherings in the capital of their Shiite Islamist state as a show of force and a security threat.”

Doshoki said Iran wants its Sunni citizens to be invisible. “That is why it prefers to keep them in small prayer rooms,” he said.

Iranian leaders reject charges of discrimination, pointing to the constitution that promises “full respect” to schools of Islam other than the official Twelver Ja’afari school, the nation’s dominant Shiite branch. The constitution lists several other Shiite and Sunni branches of Islam by name, but does not use the terms “Shiite” or “Sunni.”

Iranian state media also have asserted that Sunnis have nine mosques at which to pray in Tehran. But many Iranian Sunnis do not consider those to be “Sunni” mosques and long have sought to build a grand Sunni mosque in the capital. In its Thursday report, Sunni Online said Iran’s Shiite Islamist leaders long have denied Sunni requests to establish such a mosque, forcing Sunnis to lease rooms as prayer centers.

This report was produced in collaboration with VOA’s Persian Service.