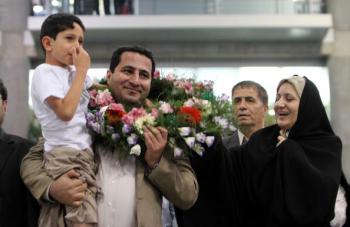 Iranian nuclear scientist Shahram Amiri is welcomed by family members upon his arrival at Imam Khomeini Airport in Tehran on July 15. Amiri claimed he was subjected to Ã�Â¢Ã¯Â¿Â½Ã¯Â¿Â½mental and physical tortureÃ�Â¢Ã¯Â¿Â½Ã¯Â¿Â½ by the CIA. (Atta Kenare/Getty Images)
Middle East

Stephen Jones
View profile
Follow
biggersmaller
Print
The Iranian scientist who claimed he was kidnapped by the CIA and subjected to intense “mental and physical torture” landed back in Tehran on Thursday.

Shahram Amiri flew back home from the United States after seeking refuge in the Iranian wing of the Pakistan Embassy in Washington.

Amiri disappeared while on Hajj pilgrimage in Saudi Arabia last year. Since then, three video statements have been released giving conflicting messages over the reason for his disappearance.

At a press conference after his arrival in Iran, Amiri claimed that he had been abducted and interrogated by the CIA for information on Iran’s nuclear program.

Officials in Washington deny that he was tortured and say he willingly defected.

Crowley said that the United States had helped facilitate his departure from the United States. "He was in need of assistance to be able to leave, and to the extent that we could, we helped him do that."

At Amiri's press conference in Iran, he claimed that CIA and Israeli agents had cooperated in his interrogation in the earliest months of his alleged capture. “I was under the harshest mental and physical torture,” he said.

"The Americans wanted me to say that I defected to America of my own will to use me for revealing some false information about Iran's nuclear work. But with God's will, I resisted,” he said.

However he stressed that he had no involvement in the Iranian nuclear program, describing himself only as a “simple researcher who was working at a university.”

“I'm not involved in any confidential jobs. I had no classified information,” he said.

Earlier this year, two videos were posted on the Internet both ostensibly by Amiri, offering contradictory accounts of how he had arrived in the United States.

In a third video, posted recently, he said that he had been kidnapped by the United States.
Unnamed U.S. officials were quoted as saying that Amiri had defected willingly and was put in a program similar to a witness-protection scheme. Then later, he had a breakdown and decided to return to Iran because he missed his family.

“He provided useful information to the United States. The Iranians now have him,” one unnamed security source told the BBC. “In terms of win-loss, it's not even a close call.”

The Washington Post quoted another U.S. security source as saying that Amiri had worked for the CIA for more than a year and had been paid $5 million.

Amiri was greeted by his wife and son in a tearful reunion at Tehran’s international airport on Thursday morning.