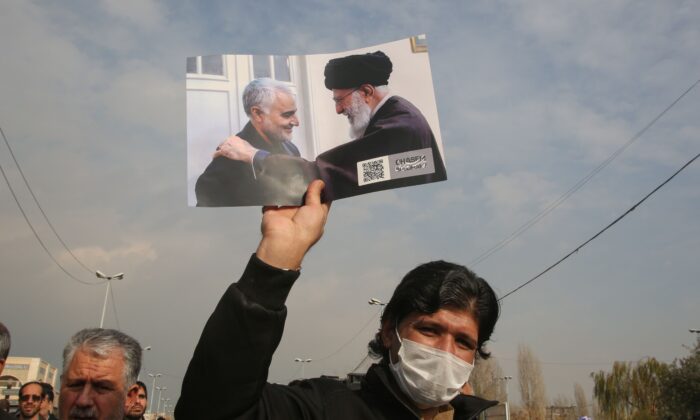 Iranian Regime Craves Revenge for Soleimani, But Faces Challenges to Its Rule

Qassem Soleimani was removed from the battlefield by U.S. drones, and the Iranian regime ordered the entire country to mourn him.

Many Iranians didn’t, and sat it out, even though the supreme leader, Ali Khamenei, was shown with tears in his eyes. Regime leaders promised revenge.

Those Iranians who did mourn generally did it because they were told to show up, and their jobs depended on their obedience. No matter that they had not been paid in weeks or months; they were moved from city to city by bus and train, and fed from public coffers. If you look carefully at the “mourners,” you can see the same faces in the mobs across the land.

There’s no doubt that Khamenei’s tears were genuine; Soleimani had been a great pillar of strength for the regime throughout the 80-year-old supreme leader’s 30-year tenure. Above all, he and his Quds Force troops provided the backbone for Bashar Assad’s survival in Syria; he held Hassan Nasrallah’s hand during Hezbollah’s battle with Israel; and he masterminded the Iranian assault against Yemen and Saudi Arabia.

Soleimani became the second-most-powerful man in the Islamic Republic and a leading contender to be Khamenei’s successor. He defied a United Nations order to stay inside Iran, and nobody tried to stop him until the U.S. drones terminated his activities last week.

The death of Soleimani was a terrible blow to the regime, which now must deal with a widespread challenge to its rule, both within Iran and throughout the region. Khamenei is well aware of his weakness; aside from the tiny sliver of faithful followers around him, he faces tens of millions of Iranians who have seen, firsthand, the failure of the Islamic Republic.

The banks have no money, the markets are without affordable food, security forces are constantly deployed to hold down anti-regime forces to the tune of hundreds of new arrests by the day, and public executions are commonplace. That is why the regime staged a bogus attack on two Iraqi bases where U.S. troops are stationed. Khamenei had to pretend that he had struck back against U.S. troops overnight on Jan. 7 to 8.

“Iran took & concluded proportionate measures in self-defense under Article 51 of UN Charter targeting base from which cowardly armed attack against our citizens & senior officials were launched. We do not seek escalation or war, but will defend ourselves against any aggression.”

Iranian “responses” to the Soleimani affair will be limited to covert actions abroad and a continuation of harsh repression at home. Khamenei is quite prepared to fight to the last Arab, as we saw with Iranian missiles aimed at bases in Iraq.

The one sure thing is that Iran didn’t exact revenge on President Donald Trump. The regime no doubt craves revenge; it would love to see him dead. Or at least out of office.

But they would have to organize the votes to do that. Of course, no one expects the Iranian mullahs to have a hand in whom the American people elect, and I doubt the 70 million Iranians who detest the regime will wait until November for that to happen.