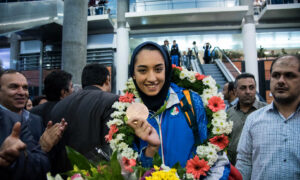 Iran's Only Female Olympic Medalist Says She Has Defected
0 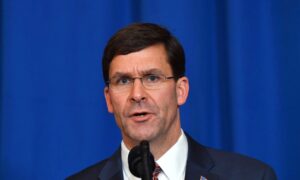 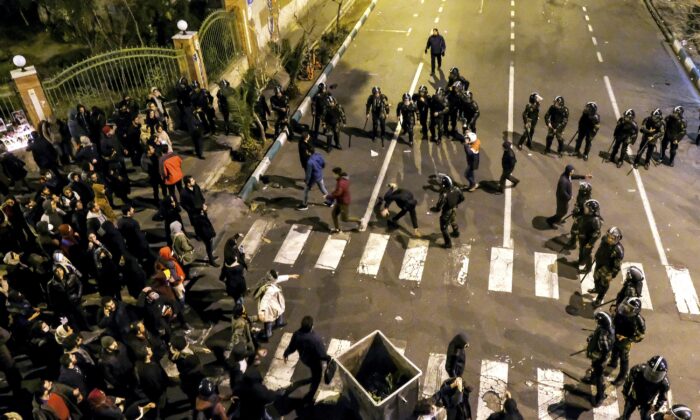 Police officials in Iran are denying reports that officers fired on people protesting the country’s leaders after they admitted to shooting down an airplane that took off from Tehran, killing 176 people on board, including dozens of Iranians.

Videos sent to the New York-based Center for Human Rights in Iran and later verified by The Associated Press show a crowd of demonstrators near Azadi, or Freedom, Square fleeing as a tear gas canister lands among them. People cough and splutter while trying to escape the fumes, with one woman calling out in Farsi: “They fired tear gas at people! Azadi Square! Death to the dictator!”

Another video shows a woman being carried away in the aftermath as a trail of blood can be seen on the ground. Those around her cry out that she has been shot in the leg.

“Oh my God, she’s bleeding nonstop!” one person shouts. Another shouts, “Bandage it!”

Photos and video after the incident show pools of blood on the sidewalk. Other videos showed police beating people.

“Police treated people who had gathered with patience and tolerance,” Iranian media quoted Rahimi as saying. “Police did not shoot in the gatherings since broad-mindedness and restraint have been the agenda of the police forces of the capital.”

However, the semi-official Fars news agency reported that police had “shot tear gas in some areas.”

Fars, which is close to the Revolutionary Guard, carried videos showing demonstrators chanting: “We are children of war. Fight with us, we will fight back.” Another Fars video showed demonstrators in Tehran on Sunday night tearing down a poster of Qassem Soleimani, who had led the Guard’s elite Quds Force.

Hadi Ghaemi, head of the Center for Human Rights in Iran, said in a statement that he was “deeply disturbed” by the videos.

“The Iranian people have a right to peacefully express their views and demand accountability from their government without fear of death, and that government has a duty to listen,” Ghaemi said in a statement.

The group said that an article in Iran’s Constitution guarantees people freedom to gather if they’re not armed.

To the leaders of Iran – DO NOT KILL YOUR PROTESTERS. Thousands have already been killed or imprisoned by you, and the World is watching. More importantly, the USA is watching. Turn your internet back on and let reporters roam free! Stop the killing of your great Iranian people!

“To the leaders of Iran – DO NOT KILL YOUR PROTESTERS. Thousands have already been killed or imprisoned by you, and the World is watching. More importantly, the USA is watching,” he wrote on Twitter.

“Turn your internet back on and let reporters roam free! Stop the killing of your great Iranian people!”

The latest protesters erupted after Iran admitted it shot down a Ukrainian plane shortly after it took off from Tehran on Jan. 8.

The Boeing 737 flew close to a sensitive military site belonging to Iran’s Islamic Revolutionary Guard Corps and was shot down due to human error, the Iranian military said on Jan. 11.

It was carrying 167 passengers and nine crew members from several countries, including 82 Iranians, at least 63 Canadians, and 11 Ukrainians, according to officials.

“Our profound regrets, apologies, and condolences to our people, to the families of all victims, and to other affected nations,” Iranian Foreign Minister Mohammad Javad Zarif wrote on Twitter.