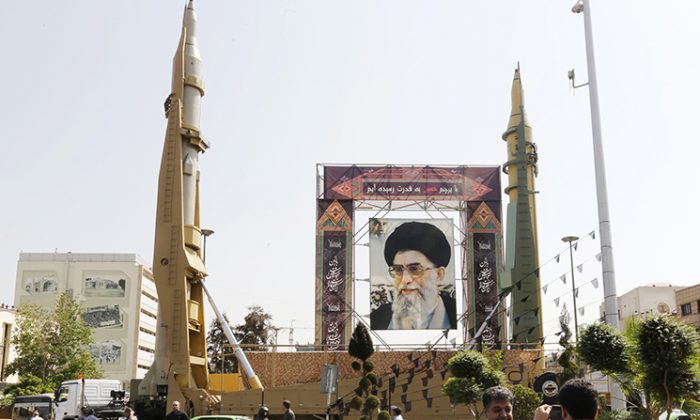 Iranian Official Warns That US Bases, Aircraft Carriers Are Within Range of Its Missiles

Iran issued a warning to the United States about its missiles, saying American military bases in Qatar, Afghanistan, and the United Arab Emirates are within its range.

Aircraft carriers are within the range of the missiles, said Amir Ali Hajizadeh, head of The Revolutionary Guard’s airspace division, Reuters reported.

“They are within our reach and we can hit them if they (Americans) make a move,” the official told a local state-run news outlet, according to Reuters. He described the American “bases around” Iran as “easy meat for us,” reported Iranian state-run mouthpiece Press TV.

The Revolutionary Guard has improved the precision of its missiles, saying it could specifically hit the Al Udeid Air Base in Qatar, the Kandahar base in Afghanistan, and the Al Dhafra base in the United Arab Emirates, Hajizadeh said.

Hajizadeh also claimed Iran is the top drone power in the region.

“The Iranian-made Shahed-129 drone, for example, had round-the-clock flights over terrorists’ positions in Syria and Iraq, and its services were also used by the Syrian army, the Russians, the Hezbollah forces, and others,” he said, via Press TV.

President Donald Trump recently restored sanctions on Iran that were lifted under a 2015 nuclear deal, which was partially brokered by former President Barack Obama. The U.S. Treasury Department on Nov. 5 said the sanctions are the harshest “ever imposed on Iran, and will target critical sectors of Iran’s economy, such as the energy, shipping and shipbuilding, and financial sectors.”

As part of the reimposition of sanctions, some 700 individuals, entities, aircraft, and vessels are now affected, the Treasury Department added.

“This action was a critical part of the reimposition of the remaining U.S. sanctions that were lifted or waived in connection with the [Joint Comprehensive Plan of Action, or JCPOA],” it said. The JCPOA is the official name of the 2015 Iran deal.

Just before the sanctions were reimposed, President Trump posted a “Game of Thrones”-inspired meme on Twitter, saying, “Sanctions Are Coming,” which is a play on the “Winter is coming” phrase mentioned in the HBO fantasy drama.

“The JCPOA, a horrible, one-sided deal, failed to achieve the fundamental objective of blocking all paths to an Iranian nuclear bomb, and it threw a lifeline of cash to a murderous dictatorship that has continued to spread bloodshed, violence, and chaos,” he said, using the acronym for the official name of the plan, according to The Hill.

The Iranian government has ruled out negotiations with Washington over its military capabilities, particularly its missile program run by The Guard, Reuters noted.

Iran, which said its missile program is purely defensive, has threatened to disrupt oil shipments through the Strait of Hormuz in the Gulf if the United States tries to strangle Iranian oil exports.

In October, The Revolutionary Guard fired missiles at ISIS terrorists in Syria after the Islamist group took responsibility for an attack at a military parade in Iran that killed 25 people, nearly half of them members of The Guard.