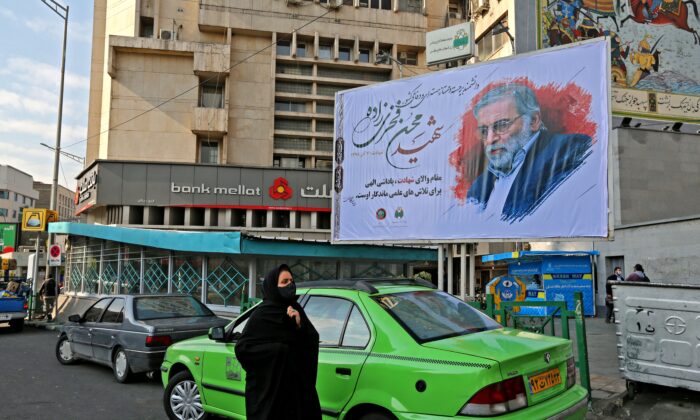 Iranian Nuclear Scientist Was NOT Killed by a Robot

The New York Times has published a story alleging that the top Iranian nuclear scientist Mohsen Fakhrizadeh was killed by a one ton Israeli killer robot that was smuggled into Iran, piece by piece. The story has been picked up by newspapers around the world—even papers in Israel—and treated as if it were true.

The Times’ story is based on an article that appeared last February in the London-based Jewish Chronicle publishing a “world exclusive” headlined, “Truth behind killing of Iran nuclear scientist Mohsen Fakhrizadeh revealed.” That story was based on a single anonymous source. The Times story likewise is based on anonymous sources, two of them dressed up to be unnamed sources from Israel’s intelligence community.

Nothing has changed since last February and the Times adds no further proof of any kind, other than to claim it did interviews in Iran and Israel.

It is important to keep in mind that the “killer robot” story originated in Iran and was promoted by Iran’s Revolutionary Guard. The Iranians, including the Revolutionary Guard, are not known for their veracity when it comes to security incidents. They have repeatedly lied about almost all of them.

For example, they denied they shot down a Ukrainian airliner until the physical evidence was so overwhelming and the international outcry so strong, that they admitted they did it and tried to blame the debacle on a couple of low level air defense operators. Iran also claimed the shoot down was not “deliberate.”

On Sept. 20, 2021 Iran flatly denied the killer robot story. They say they know who participated in the alleged killing.

There is no concrete proof of any kind that there even was a killer robot. The Iranians claimed that the robot was made to self-explode after the killing of Fakhrizadeh, but no parts of the alleged weapon have ever been put forward as evidence.

No matter how potent an explosive is, there are always parts that survive the blast. That is how just a week ago Israel found important parts of an SA-5 interceptor missile that exploded over a Tel Aviv neighborhood.

It took only a few minutes for internet sleuths to identify some of the parts. The evidence was powerful enough that Israel retaliated against the Syrian-launched missile by destroying its launcher near Damascus.

In a similar fashion, an exploded automobile that launched missiles at the Kabul International Airport still preserves the launcher intact, even though the vehicle was destroyed by a blast. That vehicle was either hit by an RPG or by an air launched missile.

In the Fakhrizadeh case there are only two pieces of evidence produced by Iran. One is the body of Mr. Fakhrizadeh, lying in state. The other is the car he was allegedly driving.

Fakrizadeh’s Nissan passenger car, which he was supposedly driving, was said to have been hit by thirteen bullets that killed only him. His wife was supposedly in the car but she was not hit. Later she told the Press that her husband always wanted to be a martyr.

The car itself is shown on a roadway, in its lane with three bullet holes on the driver’s side of the windshield. No other bullet holes are visible. The car does not appear to have swerved, but is simply stopped. The Iranians claimed that thirteen shots were fired at Fakhrizadeh, but the other ten are not accounted for by the photographic evidence. How could that be if, in fact, the killer robot weapon was controlled by Israeli assassins directing the robot from more than 1,000 miles away, allegedly by satellite? Three perfect shots and ten that missed?

A key problem with the car evidence is that the three bullet holes suggest that the shots were fired from the center of the roadway. It is unlikely that a one ton killer robot “mounted on an old truck,” was parked in the center of the roadway—it would have been seen by other motorists and alarms would have been sounded. Iran, like everywhere else, is permeated with cellular phones.

Judging from the photo of the car, the three bullets would have hit Mr. Fakhrizadeh in the head. Anyone who has ever seen the Zapruder film of the Kennedy assassination understands that when someone’s head is hit by a bullet, the head is likely to explode. In the Zapruder film Mr. Kennedy’s head partly explodes with a shower of blood. His wife then climbs onto the back of the car trying to pick up pieces of the President’s skull.

It is quite true there are different kinds of ammunition that cause varied effects on the human body. It is just as reasonable to think that if some organization went to the trouble to build and secretly deploy a one-ton killer robot, it would have used the most destructive ammunition available.

There are no photographs at the scene to corroborate any of the Iranian story that the New York Times and others now clearly promote. There are not any pictures of a blood-stained car, of a body being removed, of a distraught and blood-spattered wife, or of the killer robot’s remains (allegedly mounted on an old truck that also is missing). It follows that if Fakhrizadeh was killed in the car, much more evidence would be at the scene and the Iranians would have produced it for the world press at the time.

Likewise there is no information about the security detail that was following Fakhrizadeh, or what they did. Certainly they would have rushed to the car and extracted the body. There would, in such a case, have been blood all over the area. None is shown in the photo.

What is clear is that the Iranians in February 2020 wanted to characterize Fakhrizadeh’s death as a heinous Israeli crime carried out by clever sinister Jews who killed him in a cowardly way by doing it remotely with a high-tech killer robot.

The only difference between what the Iranians said and what the New York Times reported is that the Times went out of its way to characterize Fakhrizadeh as a nice, normal guy who was gunned down on a roadway by a killer robot. Whatever one thinks of the scientist’s character, he was a key player in building a weapon that is an existential threat to Israel’s survival. Nice guy or not, Israel had plenty of motive in this case, but that does not mean that Israel did it.

In fact, it is more likely Fakhrizadeh died of natural causes and the Iranians, led by the Revolutionary Guard, decided to stage his death and characterize it as a cowardly Israeli high-tech assassination.