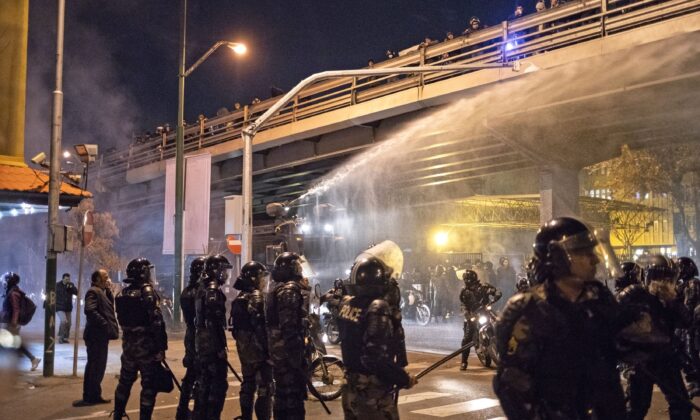 Iranian riot police use a water cannon to disperse protesters during a demonstration outside Tehran's Amir Kabir University on Jan. 11, 2020. (AFP via Getty Images)
Middle East

The internet was awash on Jan. 13 with disturbing videos of rubber bullets and teargas fired on Iranian people protesting against the shooting down of an Ukrainian passenger jet that was carrying at least 82 Iranian citizens. Iranian Human Rights organizations confirmed the reports of authorities firing on protesters over the weekend.

“Reports of riot police and security forces shooting rubber bullets at protesters and firing tear gas came from Azadi Avenue in Tehran,” said the Iran Human Rights Monitor on its website on Sunday. “Video clips of women wounded by security forces were posted on the Internet.”

The protests started on Saturday afternoon as mournful gatherings for the Iranian lives lost in the crash and soon turned into people chanting “death to liars” and seeking Ayatollah Ali Khamenei’s resignation after the authorities confessed that the Iranian military mistakenly shot down the plane.

The news of the protesters openly chanting slogans against Khamenei, the supreme leader of the Islamic regime in Iran, was confirmed on Saturday by Al Markazia, a Lebanese Central New Agency.

“The protest by thousands of Iranians in Tehran and a number of other cities in the past three days, in which people were chanting slogans like ‘Commander-in-Chief of the Armed Forces, resign, resign,’ makes it palpably clear that the Iranian people demand the mullahs’ overthrow,” Hossein Abedini, a member of the Foreign Affairs Committee of the National Council of Resistance of Iran, told The Epoch Times in a message.

“The protesters openly blamed and challenged the IRGC (Islamic Revolutionary Guard Corps), the regime’s power base for decades. This vividly indicates a new phase of more defiance in Iran as the regime has become much weaker,” said Abedini, who is also an expert on Iran’s Nuclear Program.

Various videos of the Iranian authorities allegedly firing on protesters on Saturday and Sunday have appeared online over the weekend. A few videos shared by Iran Human Rights Monitor (HRM) on Twitter show tear gas being fired at protesters inside a “Metro station” in Tehran on Sunday.

More video footage of the state security forces firing tear gas in a metro station in Tehran, #Iran
Thousands of #Iranian people took to the streets Sunday with authorities using teargas to break up a 2nd day of #IranProtests pic.twitter.com/x5ZrEzT762

A disturbing video shows blood spilled on Tehran’s Azadi street as people gather around a woman reportedly shot in the leg. Iran HRM, however, couldn’t “independently verify the date of the video.”

WARNING DISTURBING VIDEO
The video is said to be taken tonight in Tehran’s Azadi Street, #Iran
The video shows a woman who is shot in the leg.
We cannot independently verify the date of the video. #IranProtests2020 pic.twitter.com/gVTaQR4Vet

Another video reportedly was taken at the Moein Metro on Sunday. “State security forces attacked peaceful protesters using batons and tear gas. Trains are not allowed to stop at this station,” said the caption of the video.

Iran HRM also reported stories of two students—Nabi Tardast and Mohammad Esmaili—who were arrested during the Sunday protests and whose whereabouts are allegedly unknown.

Nabi Tardast, master student of sociology at Razi University of Kermanshah, W #Iran was arrested during yesterday’s #IranProtests
His condition & whereabouts are still unknown.
Thousands of people were protesting the regime’s denial that it shot down a Ukrainian jetliner. pic.twitter.com/2pcwJrKaue

Mohammad Esmaili, a senior photography students at Tehran University was arrested during yesterday’s #IranProtests
His condition &whereabouts are still unknown.
Thousands of people were protesting #Iran regime’s denial that it shot down a Ukrainian jetliner. pic.twitter.com/AqDukGGw78

Protests videos and reports of the Iranian regime firing at the protesters were also reported by MEK Iran, an Albania-based organization that works for an Iran free from “oppression and Dictatorship.”

Last week, the Iran HRM had quoted a local news agency about the arrest of four men in Shahreza, Isfahan province, on Jan. 6 on charges of “insulting Qassem Soleimani” on social media platforms, referring to the top Iranian general recently killed in a targeted U.S. drone strike.

The prosecutor general and revolutionary of the city of Shahreza, Amir Hossein Razaz Zadeh condemned the four men for “propaganda against the system” and “blasphemy.”

“Publishing content that insults the personality of martyrs is tantamount to the crime of spreading propaganda against the state,” he said, according to Iran HRM.

“In terms of the sanctity of martyrdom, it is considered blasphemy and will end in arrest and detention,” said Zadeh.

President Donald Trump issued a warning to the Iranian regime on Sunday night: “don’t kill your protesters.” He also said the “sanctions & protests have Iran ‘choked off’, will force them to negotiate.” The President left a message in both Farsi and English on his Twitter in a more personal touch toward the protesters.

National Security Adviser suggested today that sanctions & protests have Iran “choked off”, will force them to negotiate. Actually, I couldn’t care less if they negotiate. Will be totally up to them but, no nuclear weapons and “don’t kill your protesters.”

In another message written in Farsi on Twitter on Saturday, Trump expressed his support for the protesters: “To the brave and suffering Iranian people: I have stood with you since the beginning of my presidency and my government will continue to stand with you. We are following your protests closely. Your courage is inspiring.”

Iran’s IRGC on Saturday acknowledged that it accidentally shot down the Ukrainian jetliner that crashed earlier this week, killing all 176 people aboard, after the government had repeatedly denied Western accusations and mounting evidence that it was responsible.

The plane was shot down early Wednesday, hours after Iran launched a ballistic missile attack on two military bases housing U.S. troops in Iraq in retaliation for the killing of Soleimani in Baghdad. No one was killed in the attack on the U.S. bases.

General Amir Ali Hajizadeh, the head of the Guard’s aerospace division, said his unit accepts full responsibility for shooting down the plane. In an address broadcast by state TV, he said that when he learned about the downing of the plane, “I wished I was dead.”