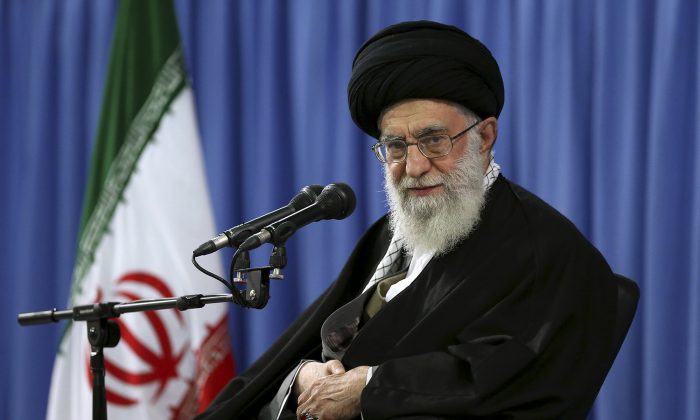 Hossein Shariatmadari, editor of the daily newspaper Kayhan and a representative of Khamenei, made the comments in an editorial Saturday. It marked the first time someone publicly has claimed where Khamenei, who has final say on all state matters, stands on the deal.

Khamenei has not publicly approved or disapproved the deal. However, he repeatedly has offered words of support for his country’s nuclear negotiators. Moderates also believe the deal would have never been reached without Khamenei’s private approval.

Iran’s parliament and the Supreme National Security Council will consider the agreement in the coming days. The deal calls for limiting Iran’s nuclear program in exchange for lifting economic sanctions.

Shariatmadari said in the editorial that many parts of the deal threaten Iran’s independence, security and “the sacred system of the Islamic republic of Iran” and that it would be “disastrous” if Tehran implements the accord. He did not specify which parts of the deal he thought were problematic.

He also referred to a speech by Khamenei last month during which the ayatollah said, “Whether this text is approved or disapproved, no one will be allowed to harm the main principles of the (ruling) Islamic system.”

The editorial noted: “Using the phrase ‘whether this text is approved or disapproved’ shows his lack of trust in the text of the deal. If His Excellency had a positive view, he would have not insisted on the need for the text to be scrutinized through legal channels … It leaves no doubt that His Excellency is not satisfied with the text.”

Another prominent hard-liner and Khamenei representative, Ayatollah Ahmad Alamolhoda, recently criticized the deal, saying it “crossed the red lines” set by Khamenei. He said the ayatollah said outsiders should never be allowed access to Iran’s security apparatus, but the deal violated that by allowing inspection of military sites.

However, Gen. Hassan Firouzabadi, the chief of staff of Iran’s armed forces and a close Khamenei ally, backed the deal last week despite having concerns over it.