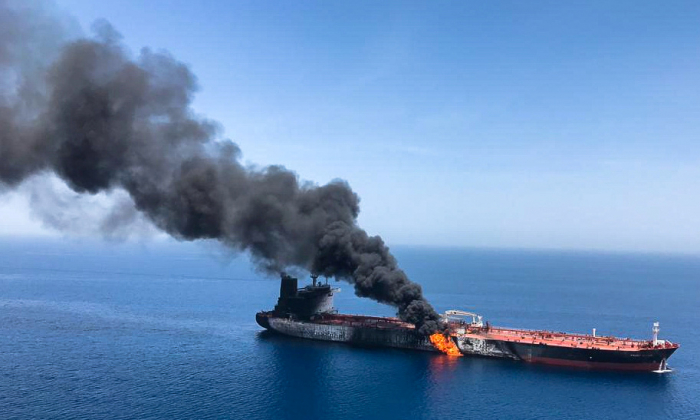 An oil tanker is seen after it was attacked at the Gulf of Oman, in waters between Gulf Arab states and Iran, June 13, 2019. (ISNA/Handout via REUTERS)
International

Iranian gunboats surrounded a rescue vessel carrying the crew of the tanker damaged outside the Persian Gulf and ordered the captain to turn over the sailors, Fox News reported, citing American officials.

Hyundai Dubai picked up the sailors from the Front Altair tanker but Iranian gunboats surrounded the ship and demanded that the tanker’s crew be surrendered, the U.S. officials said. The captain of Hyundai Dubai eventually complied with the order.

The 23 crew members are now in Iran. According to an Iranian news agency, 11 of the crew were Russian, 11 Filipino and one Georgian.

Iran has denied any involvement. The Islamic regime has previously threatened to counter sanctions on its oil exports by blocking the Strait of Hormuz, a strategic maritime passage through which one-fifth of the world’s consumer oil flows.

American guided-missile destroyer Bainbridge rescued the 21 sailors from the Kokuka Courageous, the other vessel that was attacked on June 13, according to U.S. officials. The sailors have been treated and returned to the tanker, which they will now tow back to port.

Asked how he planned to address Tehran and prevent any further incidents, Trump told Fox News: “We’re going to see.”

He also said that any move to close the Strait of Hormuz, through which the world’s biggest oil exporter Saudi Arabia and other Gulf producers ship crude, would not last long.

Tehran and Washington have both said they have no interest in starting a war.

Oil prices surged on June 13, reflecting the jitters, although they have since given up some of those gains.

The Japanese-owned tanker, abandoned by its crew, was being towed to a port in the United Arab Emirates on June 14, after a Dutch firm said it had been appointed to salvage the ships.

The second tanker, the Norwegian-owned Front Altair, which was set ablaze by a blast, was still languishing at sea, although the fire that had charred the hull had been put out.

Last year, Trump pulled out of a multi-national nuclear deal with Iran and reimposed tough sanctions on the Islamic regime. In the time leading up to the attacks on the six tankers, Washington terminated the permissions to purchase oil from Iran from some of the regime’s biggest customers. The United States also declared the regime’s military branch a terrorist organization.

The cause of the blasts on June 13 remains unclear. An initial report that Kokuka Courageous was struck by a torpedo was dismissed by a source familiar with the issue. The owner of the tanker that carried methanol later said it was hit by two “flying objects.”

A source has said a magnetic mine could have caused the explosion on Front Altair, which had a cargo of naphtha.