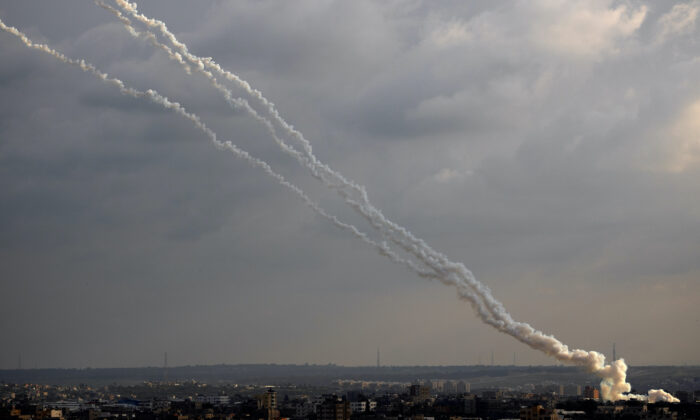 Rockets are launched from the Gaza Strip toward Israel on Feb. 24, 2020. (Khalil Hamra/AP Photo)
Middle East

The region suffered another two days of violence after Islamic Jihad fired dozens of rockets into Israel from Gaza on Sunday to avenge the death of a fighter who had been shot dead by the Israeli military after attempting to plant bombs along the Israel-Gaza border early Sunday morning, the military said.

A video of an Israeli military bulldozer driving into Gaza to pick up his body quickly went viral on Palestinian social media, sparking anger toward the Israelis.

Following the wave of rockets fired into Israel, which were mostly intercepted by Israel’s Iron Dome missile-defense system, Israeli fighter jets targeted and destroyed dozens of targets in the Gaza Strip and Syria just before midnight on Sunday, aiming for leaders of the Iranian-backed group. Two leaders were killed in one of the overnight strikes.

Islamic Jihad later identified them as Salim Salim, 24, and Ziad Mansour, 23, without disclosing their nationalities or elaborating on their roles.

“Al-Quds Brigades [Islamic Jihad’s military wing] announces that it has finished its military response to the assassination crimes in Khan Yunis and Damascus,” the group said in a statement. “It promises our people and nation that it will continue its struggle and that it will respond to any continued [aggression] by the occupation against our people and land.”

Four other Iran-backed fighters were also killed in the airstrikes, according to the Britain-based Syrian Observatory for Human Rights, reported AFP. It said the attacks were “near the Damascus international airport.”

Before the ceasefire, Israeli Prime Minister Benjamin Netanyahu issued a warning to Gaza’s Hamas rulers that he would step-up operations if the rocket fire from Gaza continued.

Musab al-Berim, a spokesman for Islamic Jihad in the Gaza Strip, said the cease-fire went into effect at 11:30 p.m. Monday, several hours after an earlier truce quickly unraveled. He said Egypt and U.N. mediators had negotiated the new deal.

In recent months, Israel has worked with U.N. and Egyptian mediators on a broader informal agreement with the Hamas, the much larger Islamic extremist group that has governed Gaza for more than a decade. These “understandings” have eased the Israeli blockade on the Gaza strip, while Hamas is required in return to guarantee a ceasefire. Israel imposed the blockade after Hamas overran Gaza from the internationally recognized Palestinian Authority in 2007.

“The past 48 hours have once again showed us how fragile the situation in Gaza is. Its population suffers under Hamas’s rule and Israeli closures, while militant activity forces Israeli communities to live in constant fear of the next rocket attack.

“No amount of humanitarian or economic support on its own will resolve either the situation in Gaza or the broader conflict. Gaza ultimately requires a political solution.”

It was the heaviest round of fighting since November when Israel and Islamic Jihad engaged in a two-day battle after Israel killed one of the group’s top commanders.

The latest Israeli airstrikes targeted only Islamic Jihad positions, but Israel holds Gaza’s Hamas rulers responsible for all fire coming out of the coastal enclave. Hamas is much more powerful than Islamic Jihad, and it has shown itself capable of barraging Israel with rocket fire for weeks at a time.

The escalation of violence threatened to disrupt next week’s Israeli national elections.

The election will be Israel’s third in under a year, after two inconclusive votes last year.

Netanyahu, locked in a tight race with Gantz while being hit with corruption charges that he claims are “politically motivated,” presents himself as an experienced statesman who is best-suited to protecting Israel’s security. But opponents have accused him of caving into the violence to keep things quiet.

“Netanyahu, the country is under fire. Get on helping it,” said Netanyahu’s chief rival, former military commander Benny Gantz, leader of the opposition Blue and White Party. “The people of the south deserve better.”

Tamar Hermann, an expert on Israeli public opinion at the Israel Democracy Institute think tank, said that after so many previous rounds of fighting, she did not expect the latest violence to have an impact on voters.

“It’s expected and people are used to it, and resilience is not being eroded because of such ‘normal events,'” she said.

Isabel Van Brugen and The Associated Press contributed to this article.