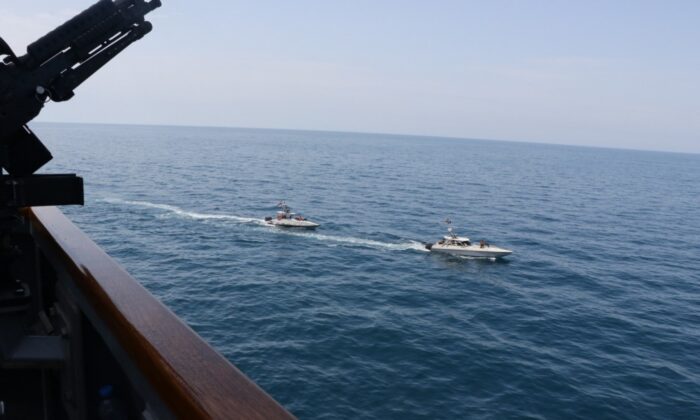 Iranian naval vessels came as close as 10 yards of the U.S. Coast Guard cutter Maui, and within 50 yards of the USS Lewis B. Puller, a ship that serves as an afloat landing base, according to the statement. Other vessels among the U.S. ships included the USS Paul Hamilton, a Navy destroyer, and the USS Firebolt.

The U.S. ships attempted to issue multiple warnings, through bridge-to-bridge radio, long-range acoustic noisemaker devices, and five blasts from the ships’ horns, but U.S. crews received no response from the IRGCN.

The IRGCN vessels responded after roughly one hour by radio and moved away from the U.S. ships.

The U.S. Navy said the “dangerous and provocative actions” from the IRGCN increased the risk of miscalculation and collision and “were not in accordance with the internationally recognized Convention on the International Regulations for Preventing Collisions at Sea (pdf).”

They were “not in accordance with the obligation under international law to act with due regard for the safety of other vessels in the area,” the statement said. While Iran is a signatory of the U.N. Convention on the Law of the Sea, it never ratified the treaty.

U.S. Secretary of State Mike Pompeo told Fox News that he and the Pentagon had discussed the issue and they are now, as a team, “evaluating how best to respond and how best to communicate our displeasure with what … took place.”

The incident comes as tensions between the United States and Iran and their allies have risen this year, following the killing of the Iranian regime’s top military official, Qassem Soleimani, which Attorney General William Barr described in January as a “legitimate act of self-defense.”

Soleimani was killed on Jan. 2 by a U.S. airstrike near Baghdad’s international airport under orders from President Donald Trump, following attacks on an Iraqi military base housing coalition counter-terrorism forces. The Pentagon said the strike was “aimed at deterring future Iranian attack plans.”

Trump earlier this month said that Iran or its proxies planned a sneak attack on U.S. targets in Iraq, and warned they would pay a “very heavy price.” A number of coalition forces have died from attacks by Iran-backed proxy groups.