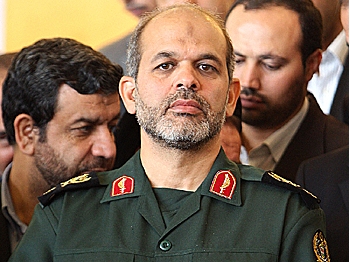 Iran to Hit Warships if Attacked

Stephen Jones
View profile
Follow
biggersmaller
Print
Iran has warned that it will strike Western warships stationed in the Gulf if it is attacked over its nuclear program.

Vahidid said that the vessels included submarines, aircraft carriers and destroyers, according to comments published by the semi-official Fars news agency.

"What is the reason underlying the deployment of this many warships and what aim are they pursuing … are they arrayed against Iran?" Fars quoted Vahidi as saying.

"The Westerners know well that the existence of these warships in the Persian Gulf serve as the best operational targets for Iran if they should want to undertake any military action against Iran," he said.

The warning comes after heightened tensions between the West and Iran over the country’s nuclear program, which is suspected to be geared toward creating a nuclear weapon. Tehran denies the charge.

Neither the U.S. nor Israel have ruled out military action against Iran if diplomacy fails.

"The Americans have made conflicting comments (on the possibility of an attack on Iran)," the official IRNA news agency quoted Vahidi as saying.