Iran Vows to Take Revenge After US Kills Top Commander 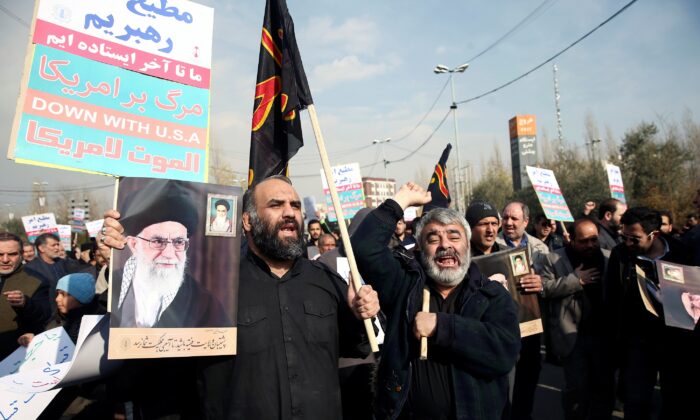 Demonstrators react during a protest against the killing of the Iranian Major-General Qassem Soleimani, head of the elite Quds Force, and Iraqi militia commander Abu Mahdi al-Muhandis who were killed in an air strike in Baghdad airport, in Tehran, Iran on Jan. 3, 2020. (Nazanin Tabatabaee/West Asia News Agency/Reuters)
By Zachary Stieber

“Years of sincere, brave efforts fighting against the devils & villainous in the world and years of wishing for martyrdom on the path of God finally took the dear Commander of Islam, Soleimani, to this lofty status. His blood was shed by the most barbaric of men,” Khamenei said in a statement posted on Twitter.

Soleimani’s efforts “won’t be stopped by his martyrdom, by God’s Power, rather a Severe Revenge awaits the criminals who have stained their hands with his and the other martyrs’ blood last night. Martyr Soleimani is an international figure of Resistance and all such people will seek revenge,” Khamenei said.

“All friends—and enemies—know that Jihad of Resistance will continue with more motivation and definite victory awaits the fighters on this blessed path. The loss of our dear General is bitter. The continuing fight and ultimate victory will be more bitter for the murderers & criminals.”

His efforts & path won’t be stopped by his martyrdom, by God’s Power, rather a #SevereRevenge awaits the criminals who have stained their hands with his & the other martyrs’ blood last night. Martyr Soleimani is an Intl figure of Resistance & all such people will seek revenge. /3

The flag of General Soleimani in defense of the country’s territorial integrity and the fight against terrorism and extremism in the region will be raised, and the path of resistance to US excesses will continue. The great nation of Iran will take revenge for this heinous crime.

Iranian President Hassan Rouhani added in a Friday statement that the U.S. airstrike was “a villainous and cowardly measure.”

“The great nation of Iran will take revenge for this heinous crime,” he said.

Javad Zarif, Iran’s foreign minister, said in a statement that Soleimani was extremely effective in fighting ISIS and other terrorist groups and called the killing an “extremely dangerous and foolish escalation.”

“The U.S. bears responsibility for all consequences of its rogue adventurism,” he said on Twitter. “The brutality and stupidity of American terrorist forces in assassinating Commander Soleimani,” Zarif said in another statement reported on by state media, “will undoubtedly make the tree of resistance in the region and the world more prosperous.”

The U.S. Department of Defense said that the killing of Soleimani was taken as a defensive action, a day after it warned that the military would take preemptive action if it learned Iran was planning attacks on American interests.

“General Soleimani was actively developing plans to attack American diplomats and service members in Iraq and throughout the region,” it said.

President Donald Trump said in a statement Friday morning that Soleimani was “directly and indirectly responsible for the death of millions of people, including the recent large number of PROTESTERS killed in Iran itself.”

“He should have been taken out many years ago!” he added.