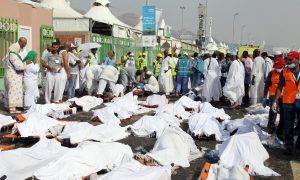 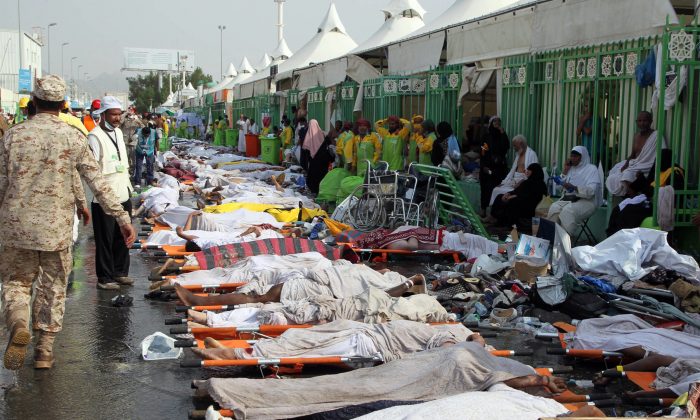 Saudi emergency personnel stand near bodies of Hajj pilgrims at the site where at least 717 were killed and hundreds wounded in a stampede in Mina, near the holy city of Mecca, at the annual hajj in Saudi Arabia on Sept 24. (STR/AFP/Getty Images)
Middle East

TEHRAN, Iran—Iran on Saturday vowed to take international legal action against Saudi Arabia’s rulers over the crush of Muslim pilgrims at this year’s hajj, which killed at least 769 people, including 136 Iranians.

The pilgrims suffocated or were trampled to death Thursday when two massive crowds converged on a narrow street, in the worst disaster to occur during the annual pilgrimage in a quarter-century. Shiite Iran has accused its Sunni archrival Saudi Arabia of mismanaging the pilgrimage, which annually draws some 2 million people from 180 countries.

Iranians comprise the largest group of casualties identified so far. Iranian state TV says Ghazanfar Roknabadi, a former ambassador to Lebanon, as well as two Iranian state TV reporters and a prominent political analyst are among those still missing.

He said Saudi authorities blocked a road used by hajj pilgrims to allow a royal convoy to pass through, causing the deadly convergence in the town of Mina on the outskirts of Mecca.

“They have to know that we will pursue the trial of Al-Saud for the crime they have committed against the hajj pilgrims through international courts and organizations.”

Iran’s Foreign Ministry meanwhile summoned the Saudi charge d’affaires for a third time in three days to protest Riyadh’s handling of the disaster. State TV said Saudi Arabia has yet to issue visas for an Iranian delegation to visit the kingdom to oversee the treatment of injured Iranians and the repatriation of remains.

The Saudi Health Ministry said Saturday on Twitter that the death toll in the hajj disaster stood at 769 pilgrims killed and 934 injured, updating previous figures. It did not offer nationalities for the dead and injured.

Iranian state TV said 136 Iranian pilgrims were among the dead and 85 were injured, while 344 Iranians remain missing.

On Saturday, the final day of the hajj, pilgrims streamed into Mina’s Jamarat, a multi-story complex with crowd-monitoring technology and wide ramps for large crowds to perform the final rites of the hajj.

Muslims believe the devil tried to talk the Prophet Ibrahim, or Abraham as he is known in the Bible, out of submitting to God’s will in Mina. In one of the final steps of the hajj, pilgrims throw stones at three large pillars in a symbolic casting away of evil.

Saudi security forces were on hand to spray pilgrims with water to help keep them cool as temperatures reached 100 degrees Fahrenheit (38 degrees Celsius). Large fans also sprayed mist to keep the hundreds of thousands of pilgrims performing their hajj rites from over-heating.

Three Saudi officers from the emergency police force at Jamarat were seen attending to a pilgrim who appeared to have suffered from sunstroke.

Sudanese pilgrim Abdullah al-Muzbahi, 42, stood to the side in Jamarat with his hands outstretched in supplication and prayer after completing the stoning ritual. He said that from his perspective, this year’s hajj went smoothly and that Saudi officials appeared to be doing all they could to safely manage the pilgrimage.

“The problem is in the culture of pilgrims, who are not organized or patient,” he said.

Saudi pilgrim Misfir al-Yami, 28, said the large crowds should be directed better to reach certain holy sites in smaller waves. He said it is the responsibility of both the security forces and the pilgrims to ensure the hajj is safe.

Syrian pilgrim Samar Zaki, 37, said there were times when she was in the midst of very large crowds that she worried for her safety.

“There are times when it is challenging,” she said. “I saw (news) about the accident that took place and it made us all very upset.”

The Mina disaster followed an accident Sept. 11 in which a storm toppled a crane at the Grand Mosque in Mecca, killing 111 people.

Iranian President Hassan Rouhani, in New York for the U.N. General Assembly, questioned whether the Saudi government could be trusted with overseeing the hajj. Rouhani told a group of editors Friday that both the stampede and the crane collapse suggested “ineptitude” on the part of Saudi authorities, and that they could be viewed as “not sufficiently responsible to be hosting” such large groups of people.

Iranians took to the streets Friday in Tehran and several over Iranian cities to denounce the Saudi rulers for mishandling the hajj. “Death to traitor Saud family,” they chanted.

Iranian police had earlier beefed up security at the site of the Saudi Embassy in north Tehran to protect the diplomatic compound in anticipation of possible protests.

Hassan Nasrallah, the leader of Lebanon’s Hezbollah group and a close ally of Iran, said the Saudi government bears the responsibility for the accident. He called for the countries with the most victims to participate in the investigation to ensure that there is no cover-up by the Saudis.