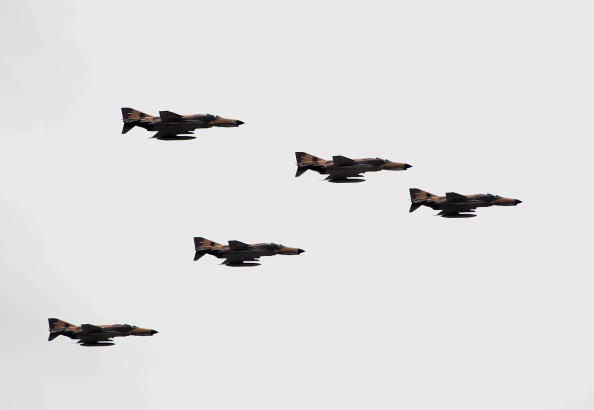 Iran is using US-made F-4 Phantom jets that were purchased prior to the country’s Islamic Revolution to bomb ISIS, or Islamic State, targets in Iraq, according to reports on Tuesday.

Meanwhile, the US said it hasn’t coordinated with Iran for military operations inside of Iraq or Syria. Iran’s fighter jets are doing missions in a region where there’s no US military presence.

Airstrikes from IRIAF F-4 Phantom II hit #IS in support of the ISF clearing op in Sa’adiyah: http://t.co/lKluVhYafm pic.twitter.com/P5jrdkM9XK

On Tuesday, an unnamed US official confirmed Iran is doing bombing runs in Iraq on ISIS targets

“We are aware of that,” the official told the Huffington Post. “I wouldn’t say we’re necessarily concerned with it — we kind of have our eyes on it.”

Al-Jazeera TV published grainy video footage of what appeared to be an F-4 Phantom jet near the Iran-Iraq border. It was later removed from the broadcaster’s website.

In the region, only Iran and Turkey operate Phantom jets. The F-4 aircraft have been in Iran since they were purchased from the US in the 1960s by the Shah government. The US government has decommissioned the Phantom aircraft in the 1990s.

Military publication IHS Jane’s Defence Weekly noted on Sunday that the jet is most likely Iranian.

“The Al Jazeera footage, which was shot on 30 November, shows the IRIAF F-4 supporting Iraqi forces retaking the town of Sa’adiya in what was purported to be the government’s largest operation against the Islamic State since June. Its release comes weeks after IHS Jane’s reported growing evidence of Iranian involvement in the war in Iraq,” it says.

And as Jane’s notes, “Iran was the first country to pledge and deliver military support to Iraq when the Islamic State began its offensive earlier in the year. At the time that the first IRIAF Su-25s arrived over Baghdad in late June, there was much speculation that Iran and the United States may come together in some form of joint operation against the Islamic State. However, the recent détente between the two countries is still in its very early stages, and neither side much relished the prospect of military co-operation to such a degree.”