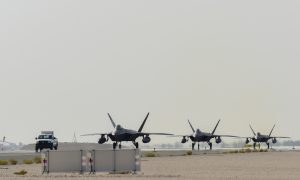 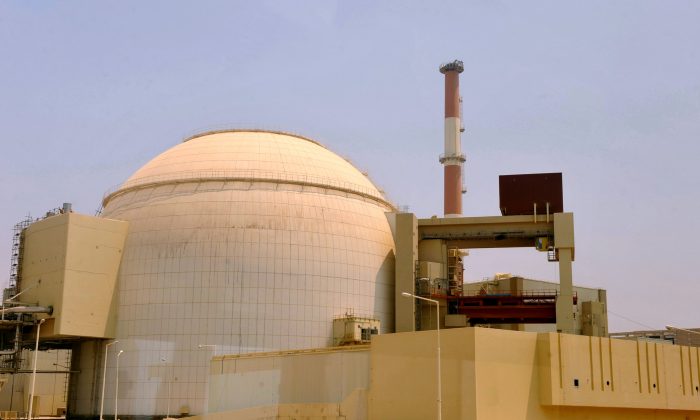 This handout image supplied by the Iran International Photo Agency shows a view of the reactor building at the Russian-built Bushehr nuclear power plant as the first fuel is loaded in Bushehr, southern Iran, on Aug. 21, 2010. (Photo by IIPA via Getty Images)
Politics

Iranian officials have announced that Tehran has begun to increase uranium enrichment above a previously agreed purity limit, in violation of a 2015 deal designed to limit the country’s nuclear ambitions.

Officials made the announcement on July 7, in line with earlier signals that Iran planned to push ahead with raising uranium enrichment to 5 percent concentration.

“The main announcement tomorrow will be the increase of the level of enrichment to 5 percent from 3.67 percent that we agreed under the deal,” an official told Reuters on July 6 on condition of anonymity.

In a live news conference on July 7, senior Iranian officials said Tehran would keep reducing its commitments every 60 days, unless European signatories of the pact protect it from U.S. sanctions.

“We are fully prepared to enrich uranium at any level and with any amount,” said Behrouz Kamalvandi, spokesman for Iran’s Atomic Energy Organization. “In a few hours, the technical process will come to an end and the enrichment beyond 3.67 percent will begin.”

“The enrichment of uranium is made for one reason and one reason only—it’s for the creation of atomic bombs,” said the Israeli prime minister.

Iran already announced on July 1 that it had accumulated 300 kilograms of uranium hexafluoride, which would have put it in breach of the deal.

Ali Akbar Velayati, a senior adviser to Supreme Leader Ayatollah Ali Khamenei, said Iranian officials were unanimous in their decision to raise the level of uranium enrichment beyond the 3.67 percent set in the accord, in remarks posted on Khamenei’s official website.

“For example, we need uranium enriched to 5 percent for use in the Bushehr [power plant] and this is a completely peaceful purpose,” Velayati said, hinting that it could be the first step Iran might take to raise the enrichment level.

Under the nuclear deal, the timeline for Iran’s ability to create a nuclear weapon was pushed back from a few weeks to roughly a year. In exchange, major powers lifted most of the trade restrictions on the regime. China, France, Germany, the European Union, Russia, and the United Kingdom are the remaining cosignatories.

Trump withdrew from the deal in 2018, saying it didn’t do enough to stop Iran from building a nuclear weapon and that it also failed to address other grievances the United States has with the Islamic regime, such as ballistic missile development, support for terrorist groups and militias, threatening maritime shipping routes, and more.

Tehran has increasingly escalated its threats of breaching the deal to force its European signatories to help circumvent sanctions imposed on Iran by Trump.

Iranian officials recently said they were unable to get much trade assistance from the Europeans, who have nonetheless tried to salvage the deal.

French President Emmanuel Macron said he and Iran’s President Hassan Rouhani had agreed to seek conditions for a resumption of dialogue on the Iranian nuclear question by July 15.

Macron’s office added that he would continue to talk with Iranian authorities and other involved parties to “engage in a de-escalation of tensions related to Iranian nuclear issue.”

Iran’s main demand—a precondition to any talks with the United States—is to be allowed to sell its oil at the levels in place before Washington pulled out of the deal and restored sanctions.

Iranian crude exports were around 300,000 barrels per day (bpd) or less in late June, industry sources said, a fraction of the more than 2.5 million bpd Iran shipped in April 2018, the month before Trump withdrew from the nuclear deal.

Iran has said its nuclear program is for peaceful purposes, such as power generation, and not to make bombs.

Yet Israeli Prime Minister Benjamin Netanyahu presented what he said were Iranian documents obtained by Israeli intelligence that proved Iran’s development of nuclear weapons before the deal was signed.

Moreover, the head of Iran’s atomic agency, Ali Akbar Salehi, said on Jan. 22 that the regime secretly bought components for its heavy water reactor near Arak Nuclear Plant, a crucial component in the production of weapons-grade plutonium, even though the deal required the regime to disable the reactor.

On July 4, authorities in Gibraltar said they intercepted an Iranian supertanker that was believed to be breaching EU sanctions by carrying Tehran’s crude oil to Syria.

A senior Spanish official said the operation was requested by the United States, while Iran’s state-run IRNA news agency called the incident “an illegal seizure of an Iranian oil tanker.”

Meanwhile, several oil tankers near the Strait of Hormuz, a crucial oil trade chokepoint off the Iranian coast, have been targeted in attacks blamed on Iran by the United States. Iran has denied involvement, but the Trump administration presented mine fragments it said came from an oil tanker damaged on June 13, saying the ordnance resembled mines displayed in Iranian military parades.

On June 20, Iran shot down a U.S. surveillance drone, saying it was over its territory. Washington denied the allegation.

Trump said he recalled retaliatory strikes at the last minute after considering the expected 150 fatalities disproportionate to losing an unmanned drone. Unnamed officials told The Associated Press that Trump authorized a retaliatory cyberattack that disabled Iran’s systems that control rocket and missile launches. The attack hasn’t been officially confirmed.

Tom Ozimek, Reuters, and The Associated Press contributed to this report.