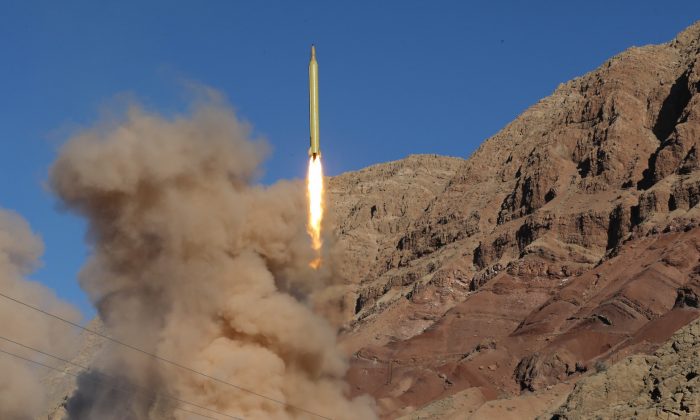 A long-range Qadr ballistic missile is launched in the Alborz mountain range in northern Iran on March 9, 2016. (Mahmood Hosseini/AFP/Getty Images)
US News

A U.S. official confirmed that Iran test-fire a medium-range ballistic missile on July 25, going about 600 miles from the southern part of the country to northern Iran.

The unnamed official told several news outlets that the country fired a Shahab-3 medium-range missile, and one told the New York Times that the projectile didn’t pose a threat to American or Western interests in the region.

The official said the missile landed east of Tehran, the capital, and stayed within the country the entire time. American officials, the person said, were monitoring the site that Iran was preparing to use as a launch site.

“We are aware of reports of a projectile launched from Iran, and have no further comment at this time,” a senior Trump administration official also told Fox News.

Mary Kaszynski, deputy policy director of the Ploughshares Fund, said that “the missile test is inconsistent with the Security Council resolution, and certainly destabilizing, but not a violation,” CNN reported.

Kaszynski noted that “unless the specific test is a significant technological advancement, this is really more about political messaging and part of the cycle of escalation” between Tehran and Washington.

U.S. Secretary of State Mike Pompeo also stated on Thursday that he was willing to go to Iran for talks amid tensions between Tehran and Washington, but also called on Japan, Britain, and other nations to join a maritime force to guard oil tankers sailing through the Strait of Hormuz.

Asked if he would be willing to go to Tehran, Pompeo said in an interview with Bloomberg TV: “Sure. If that’s the call, I’d happily go there… I would welcome the chance to speak directly to the Iranian people.”

President Donald Trump and Iranian leaders have both publicly said talks were possible, but the prospect for dialogue appeared to recede on Wednesday when the top military adviser to Iran’s Supreme Leader Ayatollah Ali Khamenei said Tehran would not negotiate with Washington under any circumstances, Reuters reported.

In a separate interview broadcast by Fox News, Pompeo said that Washington had already asked Japan, France, Germany, South Korea, Australia, and other nations to join a planned maritime security initiative in the Middle East.

“Every country that has an interest in ensuring that those waterways are open and crude oil and other products can flow through the Strait of Hormuz needs to participate,” Pompeo said.

Earlier this week, Trump stated that Iran’s recent moves in the region, including its capturing of a British ship, has made it more difficult for him to want to make a deal with the country.

“One of the best things I’ve done is terminate that ridiculous deal. If they want to make a deal, it’s—frankly, it’s getting harder for me to want to make a deal with Iran because they behave very badly. They’re saying bad things,” Trump said at the Oval Office on Monday.