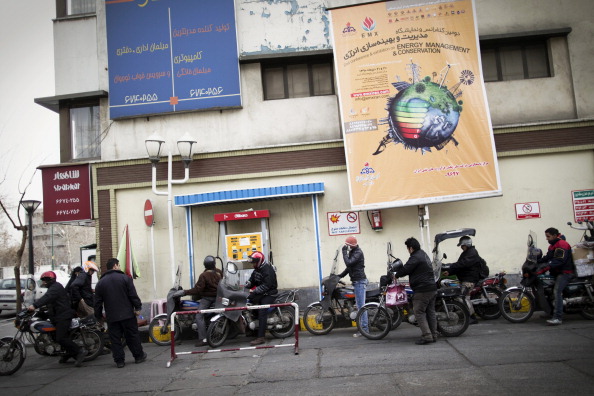 Iranians line up at a petrol station to fuel their motorcycles in central Tehran on February 19, 2012. Iran has halted its limited oil sales to France and Britain on Sunday in retaliation for a phased EU ban on Iranian oil that is yet to take full effect. (Behrouz Mehri/AFP/Getty Images)
Middle East

Iran halted the sale of crude oil to Britain and France, the country’s oil ministry announced on Sunday.

The move comes months before an European Union deadline for banning oil imports from Iran was due to come into force.

“Exporting crude to British and French companies has been stopped … we will sell our oil to new customers,” spokesman Alireza Nikzad was quoted as saying by the ministry of petroleum website.

The EU agreed a deadline of July 1 for halting imports of Iranian crude. The postponement of any immediate ban was to help resolve existing contracts, especially in countries such as Greece, Italy and Spain.

It was hoped that the EU embargo would dissuade the Islamic Republic from pursuing its nuclear program, which is suspected to have military dimensions. Iran insists it is a purely civilian project.

The EU currently accounts for 20 percent of Iranian crude exports. However, Iran insisted on Sunday that it would look elsewhere.

“We have our own customers,” said Nikzad. “The replacements for these companies have been considered by Iran.”

The move will likely not affect France or the U.K. very much as Iran accounts for 3 percent of all oil imported into France and even less to Britain, according to Le Monde newspaper.

“The Iranian decision has no direct practical consequences,” Jean-Louis Schilansky, president of the French Union of Petroleum Industries, told the newspaper. Further, he added, “France has practically ceased to import Iranian oil” since last year.

The EU’s move to freeze oil exports to exert pressure on Tehran over its disputed nuclear program, which the U.S. and other Western powers say could be used for weapons. However, Iran has maintained that its program is for civilian uses only.

An Iranian member of parliament, Nasser Soudani, told Iran’s semi-official Mehr News Agency that the Islamic Republic may stop exports to several other EU countries in the future.

“All scenarios are on the table,” Soudani told the news agency, adding, “Correspondence has been exchanged with certain European countries, and they have been asked to reconsider their hostile decisions toward Iran.”