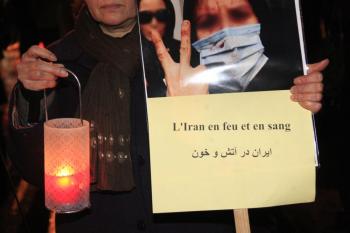 Iran Steps Up Crackdown on Demonstrators

The statement from the conservative Iranian Parliament came after the arrest of several journalists and activitists—among them was the sister of Iranian poet and Nobel Laureate Shirin Ebadi.

On Sunday, eight people were killed as security forces opened fire on demonstrators who had gathered on the Shiite holy day of Ashura. Among those killed was the nephew of opposition leader Mir Hossein Mousavi.

"Parliament wants the judiciary and intelligence bodies to arrest those who insult religion and impose the maximum punishment on them without reservation," said the statement read by parliament speaker Ali Larijani on television on Tuesday.

Iran has seen a steady increase in the number of protests in recent months following the results of the disputed re-election of Mahmoud Ahmadinejad.

While the MPs' statement denounced Sunday's demonstrators as "counter-revolutionaries,” it appealed to opposition leaders to distance themselves from the restive movement.

"We expect these gentlemen who had complaints in the election to wake up and clearly separate their path from this wicked movement, not to come out and issue statements again and make the air dustier," the statement said.

President Barack Obama called for the release of protesters and an end to what he described as a "violent and unjust suppression.”

Iranian MPs said that the statement "disgraces" the U.S., and "causes the system to act more firmly.”

On Tuesday, Shirin Ebadi—who won the Nobel Peace Prize in 2003 for championing the cause of human rights in Iran—said that her sister had been arrested.

"My sister Dr Nooshin Ebadi was arrested at 9 p.m. (1630 GMT) on December 28 by four intelligence agents at her home and sent to prison," Ebadi said in a statement on the Rahesabz opposition Web site.

"I am not aware of the place of her detention or the reason for her arrest," she said, describing her sister as a professor of medicine.

Ebadi left Iran a day before the results of the disputed June 12 election. Since then she has been urging the international community to act against the increasing human rights violations by the Islamic regime.

According to the Rahesabz Web site, three journalists and a women's rights campaigner were also arrested on Monday.