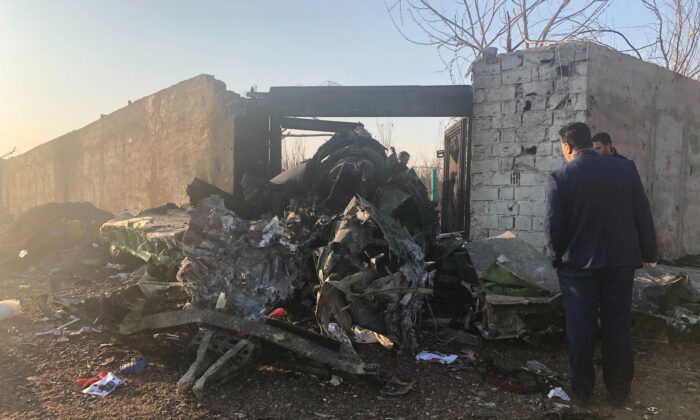 Debris is seen from a plane crash on the outskirts of Tehran, Iran, Jan. 8, 2020. (Mohammad Nasiri/AP)
Middle East

Iran announced that its military “unintentionally” shot down a Ukrainian jetliner, resulting in the deaths of all 176 aboard, according to reports.

The Boeing 737 had flown close to a sensitive military site belonging to Iran’s Islamic Revolutionary Guard Corps and was shot down due to human error, the Iranian military said on Saturday morning in a statement read on state TV.

The crash took place on Wednesday, Jan. 8 on the outskirts of Tehran shortly after it took off from Tehran’s Imam Khomeini Airport, and just hours after Iran launched a barrage of missiles at U.S. forces.

The plane, operated by Ukrainian International Airlines, was en route to the Ukrainian capital of Kyiv and was carrying 167 passengers and nine crew members from several countries, including 82 Iranians, at least 63 Canadians, and 11 Ukrainians, according to officials.

The Iranian military statement expressed condolences to the families of the victims who died in the crash. The statement added that responsible parties would be referred to a judicial department within the military and be held accountable, Reuters reported.

“Our profound regrets, apologies, and condolences to our people, to the families of all victims, and to other affected nations,” he added.

Iran had denied for several days that a missile caused the aircraft to crash. The United States and Canada, citing intelligence, later said they believe Iran shot down the aircraft.