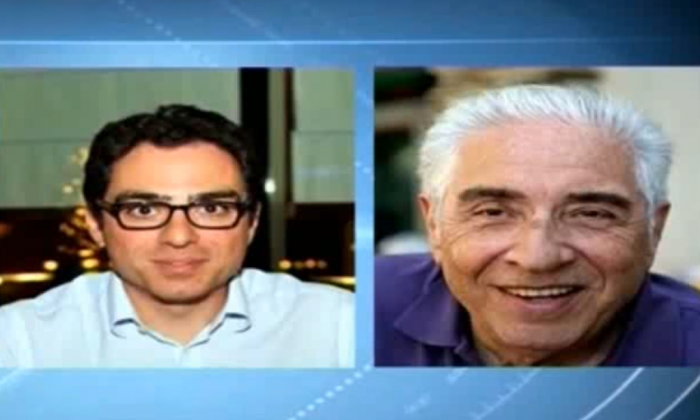 Iran Sentences Iranian-American, His Father Each to 10 Years

TEHRAN, Iran—An Iranian-American businessman and his father have been sentenced to 10 years in prison in Iran, a state-run judicial news agency reported Tuesday, the latest dual nationals imprisoned since the nuclear deal.

The announcement by the Mizan news agency came a day after it released footage of businessman Siamak Namazi. The video highlighted recent tensions between Iran and the U.S. and was a sign of the power still wielded by hard-liners in the Islamic Republic.

The Mizan report said Namazi and his 80-year-old father Baquer Namazi, a former UNICEF representative who once served as governor of Iran’s oil-rich Khuzestan province under the U.S.-backed shah, were convicted of “cooperating with the hostile American government.” It did not elaborate.

A Namazi family statement posted online described the sentences as “beyond comprehension.”

“My father has been handed practically a death sentence and it will be a criminal act by me, his only able son, not to fight for my father’s life and freedom as well as that (of) my brother,” wrote another son, Babak Namazi.

The U.S. State Department said it was “deeply concerned” by reports of the sentencing.

“We join recent calls by international organizations and UN human rights experts for the immediate release of all U.S. citizens unjustly detained in Iran, including Siamak and Baquer Namazi, so that they can return to their families,” said a State Department spokesman, Mark Toner.

“The entire UNICEF family are deeply concerned for his health and well-being,” UNICEF said. “Baquer has been a humanitarian all his life. We appeal for his release on humanitarian grounds.”

The Mizan report said Nizar Zakka, a U.S. permanent resident from Lebanon, also received a 10-year prison sentence. His supporters had earlier told The Associated Press about the sentence, though the Mizan report was the first official Iranian confirmation of it.

It said two others had been convicted as well, without naming them or identifying their nationalities.

Later Tuesday, the semi-official Fars news agency quoted Tehran prosecutor Abbas Jafari Dolatabadi as saying three Iranians were sentenced to 10-years imprisonment for “espionage and cooperating with the U.S. government.” He named them as Farhad Abdesaleh, Kamran Ghaderi and Alireza Omidvar, without elaborating. It was unclear if they had lawyers or if they were among the two previously mentioned by Mizan.

The Namazi family fled after the 1979 Islamic Revolution, but appears to have kept business ties in Iran, and the younger Namazi traveled back several times. He also wrote several articles calling for improved ties between Iran and the U.S., and urging Iranian-Americans to act as a bridge between the rival governments.

Still, Siamak Namazi’s efforts raised suspicions among hard-liners in Iran. In May 2015, a hard-line Iranian website called Fardanews specifically pointed to him in a highly critical article, accusing him of being part of efforts to allow the West to infiltrate Iran.

On Monday, Mizan released a video of the younger Namazi, the first images of him since his detention in October 2015. The montage of clips included an Iranian drone flying over a U.S. aircraft carrier and American sailors on their knees after being briefly detained by Iran in January.

It showed Namazi’s U.S. passport, his United Arab Emirates ID card and a clip of him in a conference room, his arms raised at his sides.

At the end of the video, it also showed a still image of U.S. Rep. Ed Royce, a California Republican who chairs the House’s Foreign Affairs Committee, quoting him describing Namazi’s arrest as a “latest show of contempt for America.”

The Namazis were not released as part of a January deal that freed detained Washington Post journalist Jason Rezaian and three other Iranian-Americans in exchange for pardons or charges being dropped against seven Iranians.

That deal also saw the U.S. make a $400 million cash delivery to Iran.

Analysts and family members of those detained in Iran have suggested Iran wants to negotiate another deal with the West to free those held. In September, Iran freed a retired Canadian-Iranian university professor amid negotiations to reopen embassies in the two nations.

Others with Western ties recently detained in Iran include Robin Shahini, an Iranian-American detained while visiting family who previously had made online comments criticizing Iran’s human rights record, and Nazanin Zaghari-Ratcliffe, a British-Iranian woman sentenced to five years in prison on allegations of planning the “soft toppling” of Iran’s government while traveling with her young daughter.

Still missing is former FBI agent Robert Levinson, who vanished in Iran in 2007 while on an unauthorized CIA mission.

“We also respectfully underscore the importance of Iran cooperating with the United States to determine the whereabouts of Mr. Robert Levinson, who went missing on Iran’s Kish Island,” said Toner, the State Department spokesman. “As President Obama stated last January, we will not rest until the Levinson family is whole again.”