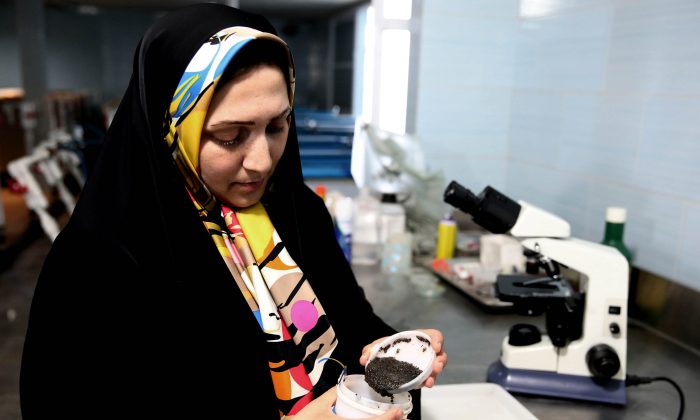 GOLDASHT, Iran—On the shores of the Caspian Sea, an ambitious project is underway to produce a pricey delicacy that could boost Iran’s economy as sanctions ease: caviar.

Iran, once the world’s biggest exporter of the luxury food, sold over 40 tons of sturgeon eggs in 2000. Exports plunged to just 1 ton last year due to dwindling fish stocks and economic sanctions imposed by world powers in response to Iran’s nuclear program.

After Tehran struck a landmark deal this summer to curb its nuclear ambitions in exchange for lifting sanctions — including those on caviar — some in Iran are now counting on a revival in exports of the exclusive eggs.

“We hope that as a result of the Iranian government’s interaction with the world, the path will be opened for us to export our products abroad and bring in foreign currency earnings. It does not make a difference where we export to, the United States or Europe,” said Ishaq Islami, manager of the private Ghareh Boron Caviar Fish Farm in the coastal village of Goldasht.

The farm and two nearby facilities are breeding half a million sturgeon fingerlings a year, filling its pools with water pumped in from the Caspian Sea.

Islami began the $100 million project in 2005 but it takes at least 12 years for sturgeon to mature and produce caviar. About 110,000 are beluga species that produce prized silver-gray eggs, the world’s most expensive caviar.

The fish farm aims to export 30 tons of salt-cured caviar and 2,000 tons of sturgeon meat in three years. Islami expects to earn $90 million a year based on an average price of $3,000 a kilogram (about $1,360 a pound) for caviar. The United States, Europe and Japan have traditionally been Iran’s biggest export markets.

“Our annual projected hard currency earnings in 2018 will be equal to the value of two days of Iran’s crude oil exports,” he said. OPEC member Iran is currently exporting about one million barrels of oil per day, with the price of U.S. benchmark crude trading below $42 a barrel.

Caviar production fits with the Iranian government’s plan to reduce reliance on crude oil revenues and build up a broader range of exports.

“Lifting sanctions, specifically banking restrictions, will facilitate caviar exports and help the industry flourish in Iran,” industry analyst Nasser Oktaei said. “The U.S. is obviously one of the world’s biggest caviar importers. Iran caviar exports to the U.S., if materialized, will inject a new blood into the industry and bring in the much-needed hard currency.”

The 80,000-square meter (860,000-sq. foot) Ghareh Boron farm is one of three facilities run by Islami to raise sturgeon, which are threatened by overfishing, pollution and destruction of spawning sites. These factors contributed to the vast decline of sturgeon stocks in the Caspian Sea, the source of 90 percent of the world’s caviar.

A temporary global ban on wild sturgeon was imposed in 2001 amid fears that the beluga species was facing extinction. Caviar exports are now subject to quotas while the five countries on the Caspian Sea have agreed to extend the ban on commercial fishing to allow wild stocks to replenish.

The farm in Goldasht, one of several communities bearing the name in Iran, sits 310 kilometers (190 miles) north of Tehran. Sturgeon up to 2 meters long swim lazily in large concrete pools filled with murky sea water, eating food pellets that workers throw in by the handful.

Hasan Habibnejad, the provincial fisheries chief, says the facility has created some 200 jobs.

“We hope this facility will turn into the capital of the world’s caviar,” said Hasan Habibnejad, the provincial fisheries chief.

Islami has bigger plans for his fish farm. “In addition to exporting female eggs and sturgeon meat, we will also produce oil and cosmetics. Sturgeon skin can also make good leather. Its intestine can be turned into sutures. Nothing is wasted. We also plan to turn our facility into a tourism attraction where customers will be able to buy the prized caviar and other products,” he said.

Several small-scale sturgeon farms have popped up across Iran in recent years, including one facility in a desert town in central Iran and another in Qom, Iran’s religious capital, all hoping to grab a share of the expected caviar revival.

“Banks didn’t give me loans and even the authorities were opposed to breeding sturgeon in the desert,” said Qom farmer Mohammad Taqi Barkhordari, who filled his pools with salt water pumped from wells. “It worked. Nothing is impossible if you have will and determination.”