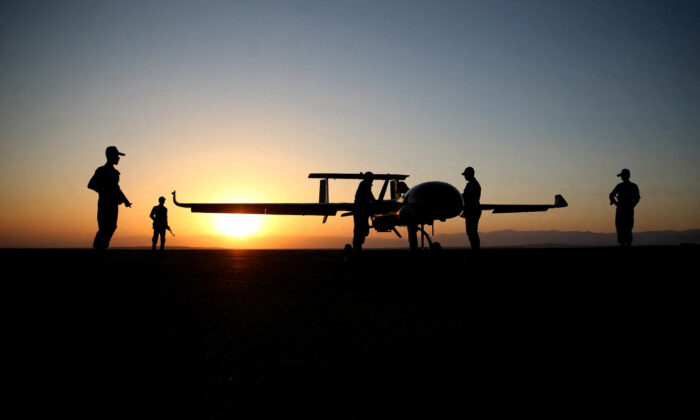 A view of a drone during a military exercise in an undisclosed location in Iran, obtained on Aug. 24, 2022. (Iranian Army/West Asia News Agency/Handout via Reuters)
Middle East

An Iranian general on the anniversary of the Sept. 11 terrorist attacks made a veiled threat at Israel, claiming that the Islamist regime has developed new ≈ drones specifically for attacking major Israeli cities.

“We have specially designed this drone for Haifa and Tel Aviv,” Heydari said. “This is a unique drone that was developed for this task.”

The suicide drone is called the Arash-2 UAV.

He described the Arash-2 as a “spotter,” claiming it can hit targets like the Islamic Revolutionary Guard Corps’s (IRGC) “Fath” ballistic missiles that deploy short-range attacks for suppressing the enemy’s anti-missile systems, according to Iran Press.

The IRGC is the Iranian special operations and intelligence force.

According to analysts, Tehran officials often make exaggerated claims that exceed their proven capabilities. Iran is already in possession of drones that can reach Israel, although they have not been successful against Israel’s defense systems.

Tehran’s drone program has been subject to years of U.S. sanctions aimed to limit its development, following Iran and its proxies being blamed for attempted and successful attacks on U.S. targets and those of its Gulf state allies, Israel, and Saudi Arabia in the region.

The most recent allegations are that Tehran’s drones are supporting Russia’s war in Ukraine.

“The Russian military is suffering from major supply shortages in Ukraine, in part because of sanctions and export controls, forcing Russia to turn to unreliable countries like Iran for supplies and equipment,” U.S. Secretary of State Antony Blinken said on Sept. 8.

According to media reports, the Iranian regime had showcased two models of drones—the Shahed-129 and Shahed-191—to Russia in June.

Tehran denied the allegations, while U.S. national security adviser Jake Sullivan told reporters in Julythat the United States has information showing that Iran is preparing to provide Russia with up to several hundred drones.

“In the past, the IRGC ASF distributed U.S. and Israeli-made UAVs to Paravar Pars Company, which were ultimately used to reverse engineer and reproduce indigenously made UAV models,” the statement from the Treasury said.

Baharestan Kish Company’s managing director Rehmatollah Heidari was also named in the sanctions. The entities listed have had their U.S.based assets frozen and are banned from conducting U.S.-related business.

Brian Nelson, Treasury undersecretary for Terrorism and Financial Intelligence, said the department “is committed to strictly enforcing our sanctions against both Russia and Iran and holding accountable Iran and those supporting Russia’s war of aggression against Ukraine.”

The United States will not hesitate to target producers and procurers who contribute to Tehran and the IRGC’s drone program, he added.

Iran and Russia have been increasing their military and economic cooperation in recent months, as both regimes are facing limited options for partners in the international community amid heavy sanctions.

The threats come amid talks to revive the failed Iran nuclear deal as well as Tehran’s admission that it now has the technical means to produce a nuclear bomb if it chooses.

Top Iranian officials—including Supreme Leader Ayatollah Ali Khamenei—made numerous threats against Tel Aviv and Haifa, most recently in June, saying that if Iran is attacked, presumably over its nuclear activities, Tehran will respond and “raze” both cities to the ground.

Israel’s Prime Minister, Yair Lapid, thanked France, the UK, and Germany on Sunday for their “firm position” on Tehran after they blamed the regime for “jeopardising” the nuclear deal with their demands to remove the IRGC from terrorist listing, among other issues.