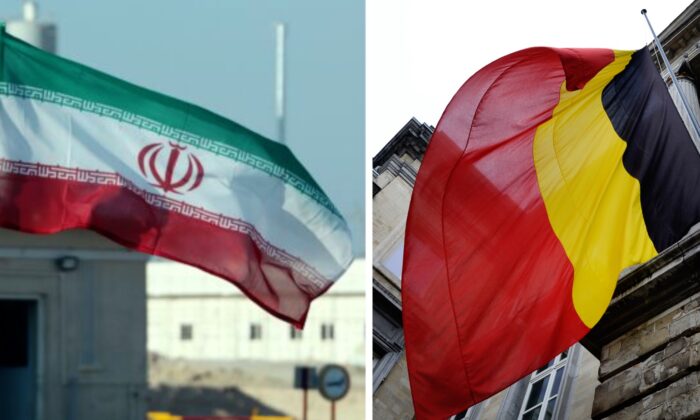 The Iranian regime is in talks with Belgian government officials to call for the release of Assadollah Assadi, an Iranian diplomat who was sentenced to prison in Belgium on terrorism charges, a Tehran official announced on Wednesday.

“Assadi’s unconditional release is Iran’s request, and talks are ongoing with the Belgian government,” Nasser Kanaani, an Iranian foreign ministry spokesman, was quoted as saying by Iranian state media. “We hope that with the efforts we have made, we will see the release of this diplomat in the near future.”

In 2021, Assadi was sentenced to 20 years in prison in Belgium for his involvement in a foiled 2018 bomb plot attack in Paris. His was the first trial of an Iranian official for suspected terrorism in Europe since Iran’s 1979 revolution.

Last week, lawmakers in Belgium gave initial clearance to a prisoner exchange treaty with the Iranian regime that will allow the two countries to extradite prisoners to each other.

The treaty has been sharply criticized, including by members of the National Council of Resistance of Iran (NCRI), whose rally near the French capital had been the target of the 2018 bomb plot. The Iranian opposition group, which is headquartered in France, called the treaty “shameful” and said it gave Iran a green light to carry out attacks in Belgium.

“This is a treaty with the world’s number one state sponsor of terrorism and it’s only designed to release a convicted terrorist,” Farzin Hashemi, deputy chair of the group’s foreign affairs committee, said during a news conference after the debate.

The Islamic regime has dismissed all terrorism accusations, calling the Paris attack allegations a “false flag” stunt by the NCRI, which Tehran, in turn, considers a terrorist group.

Several Belgian lawmakers also voiced concern that the treaty, as proposed, might lead to “hostage diplomacy” and put other Belgians at risk of detention.

“Countries like Iran now know that they will be rewarded when they take Belgians into captivity,” lawmakers of the political party New Flemish Alliance were quoted as saying by local media.

Belgian Prime Minister Alexander De Croo defended the treaty, saying Brussels has “no lessons to be learned from anyone when it comes to tracking down, indicting, convicting, and imprisoning terrorists, even if they are diplomats.”

Other government officials also defended the deal because it might secure the release of a Belgian aid worker, Olivier Vandecasteele, who has been jailed in Tehran since February.

“The message we want to send with this deal is that we will not abandon people who are wrongfully in a foreign prison,” De Croo said.

Meanwhile, a group of about a dozen human rights organizations appealed to Belgian government officials to suspend the latest agreement with Tehran on mutual prisoners exchange.

In a joint statement released on July 12, the groups appealed to Parliament members in Brussels to cancel the accord, saying it could result in the release of a convicted terrorist and “legitimize Iran’s hostage-taking.”

The measure still needs to be put before the full 150-member lower house of Parliament, most likely in the next two weeks, but the chamber normally follows votes of its committees, given they have similar party compositions.

It is not clear when a prisoner exchange might happen.