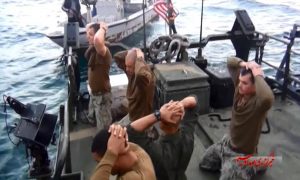 Iran Releases Video of US Sailor Crying in Captivity

An Iranian state television network has broadcasted new footage of the American sailors while they were in captivity, including one sailor who was seen crying.

It also featured interviews with some of the captured sailors, who testified that the Iranians had treated them well, and that the U.S. were at fault because they had trespassed on Iranian sea-territory.

The crew of 10 were captured by by the Iranian Navy while sailing in the Persian Gulf on January 12 after they were suspected of gathering intelligence there, and were held on Farsi Island for 16 hours before being released, the Navy Times reports.

Iran had been praised by Secretary of State John Kerry for the “quick and appropriate response” to the situation, the Hill reports, and many had remarked on the swiftness of the whole episode.

Meanwhile, a State Department official told lawmakers Thursday he was unsure of the precise location of tons of low-enriched uranium shipped out of Iran on a Russian vessel as part of the landmark nuclear agreement.

Ambassador Stephen Mull, the lead U.S. official overseeing the deal’s implementation, said during testimony before the House Foreign Affairs Committee that the stockpile is a Russian custody issue. He said the U.S. is confident the material will be controlled properly.

“We obviously have had many differences for many years with Russia,” Mull said. “But one of the features of our relationship is pretty close cooperation and protection of nuclear material.”

Following the hearing, a senior administration official said the Iranian stockpile is in Russia, where it will be stored in a secure place, but did not specify where. The official was not authorized to speak publicly and requested anonymity.