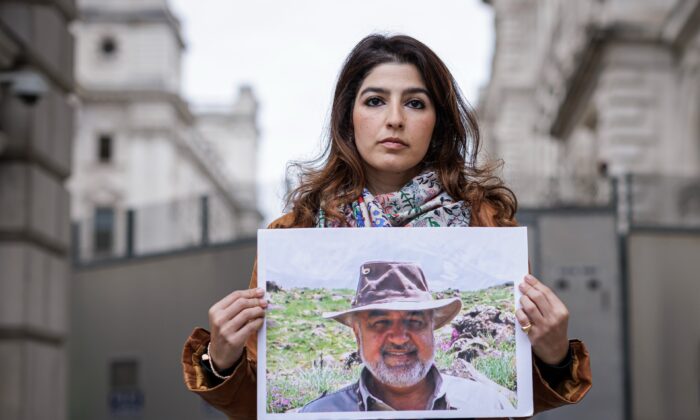 Roxanne Tahbaz holds a photograph of her father, Morad Tahbaz, outside the Foreign, Commonwealth and Development Office (FCDO) in London, on April 13, 2022. (Rob Pinney/Getty Images)
UK

A British-U.S.-Iranian environmentalist who has spent more than four years in an Iranian prison has been released on furlough with an electronic tag.

Morad Tahbaz, 66, has been released from the Evin prison and is at his family’s home in the Iranian capital Tehran, Britain’s Foreign, Commonwealth and Development Office (FCDO) said on July 27.

An FCDO spokesperson said: “Morad is a tri-national and we continue to work closely with the United States to urge the Iranian authorities to permanently release him and allow his departure from Iran.”

Tahbaz is a prominent wildlife conservationist and board member of the Persian Wildlife Heritage Foundation that seeks to protect endangered species.

He was arrested during a clampdown on environmental activists in January 2018. He was sentenced to 10 years in prison with his colleagues on vague charges of spying for the United States and undermining Iran’s security. His wife has also been placed under a travel ban by the Iranian authorities.

Tahbaz was initially released on March 16 along with two other British Iranian national detainees—43-year-old Nazanin Zaghari-Ratcliffe and 67-year-old Anoosheh Ashoori—after months of intensive diplomatic negotiations between London and Tehran.

On the same day, Zaghari-Ratcliffe and Ashoori were allowed to return to the UK, and the UK government announced it had authorised the payment of a £393.8 million ($515 million) historical debt to Iran “in parallel” with the release.

However, London-born Morad Tahbaz remained in Tehran. British ministers said his U.S. citizenship had complicated the matter as “that is seen in Iranian eyes as also meaning that the [United States] are involved.”

Tahbaz’s daughter Roxanne said she is glad he can be with his wife and get the medical care he urgently requires.

But she said the UK government’s work remains “unfinished.”

“My father is a UK-born national and he and my mother should have been on the flight with Nazanin and Anoosheh four months ago,” she wrote in a statement.

She urged Foreign Secretary Liz Truss to “stand by her promise” and “ensure his unconditional release.”

The call was echoed by Eilidh Macpherson from Amnesty International UK, who said the UK should be “pressing hard for Morad’s full, unconditional release and permission for him to leave Iran along with his wife Vida.”

She said: “Back in March when Morad was given a temporary release for just 48 hours, it was clear the Iranian authorities were once again playing cruel games with a British national for diplomatic gain.

“It goes without saying that Morad should never have been jailed in the first place and it remains a matter of grave concern that British nationals continue to be held arbitrarily by the Iranian authorities like this.”