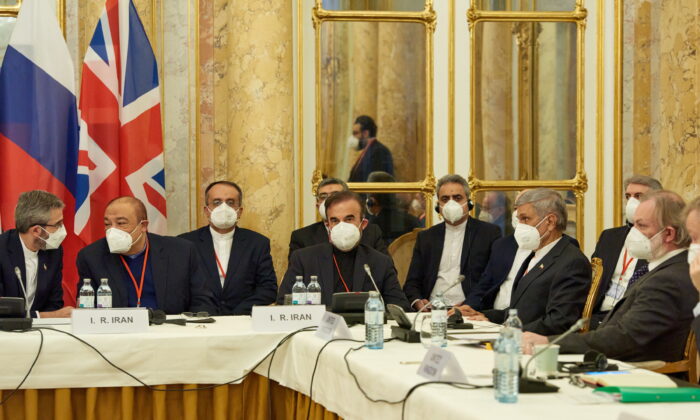 Iran's chief nuclear negotiator Ali Bagheri Kani and members of the Iranian delegation wait for the start of a meeting of the JCPOA Joint Commission in Vienna, Austria November 29, 2021. (EU Delegation in Vienna/Handout via REUTERS)
Middle East

Iran Rejoins Nuclear Talk With Harsh Demands: ‘The Sanctions Must Be Lifted’

After leaving for more than five months, Iran returned to talks on a nuclear deal on Monday in Vienna, doubling down on its demand that sanctions must be lifted to salvage the deal.

In June, the talks between Tehran and six other parties—the UK, France, Germany, Russia, China, and the EU—were put on hold because Iran had a new, hardline president, Ebrahim Raisi, at the time.

The new president appointed a delegation for the negotiations with maximalist demands, including calls for the United States to unfreeze $10 billion in assets as an initial goodwill gesture.

“The explicit and clear view of the Islamic Republic of Iran is that the rights and interests of the Iranian people must be realized at the negotiating table,” Iran’s Foreign Minister Hossein Amir-Abdollahian said in a video message released Sunday. “The sanctions must be lifted.”

The top diplomat said Iran is serious with the talks but warned “Iran’s hands will definitely not be tied.”

The United States left the Iran nuclear deal—the Joint Comprehensive Plan of Action (JCPOA)—under former President Donald Trump in 2018. Under the deal, Iran would limit its nuclear development in exchange for sanctions being lifted.

In a statement released on Monday, the Iranian top diplomat restated that “it goes without saying that in order to return to the JCPOA, Iran should benefit fully from the lifting of all the sanctions,” warning that “this opportunity is not a window that could remain open forever and the U.S. and the three European countries must well understand this.”

The United States participated in the negotiations but remains outside of the talks. Iran refused to talk to Americans directly, forcing other negotiators to go between the United States and Iran to exchange views.

After the first session on Monday, Enrique Mora, the European Union official who coordinates the discussions, said the Iranian team had agreed to discussions on its nuclear work on Wednesday, following discussions about sanctions on Tuesday, the Wall Street Journal reported.

Iran now enriches small amounts of uranium up to 60 percent purity—a short step from weapons-grade levels of 90 percent. Iran has also been spinning advanced centrifuges barred by the accord and its uranium stockpile now far exceeds the accord’s limits.

Last week, a delegation led by the head of the International Atomic Energy Agency, Rafael Grossi, failed to make any progress on fully monitoring Iran’s program after Tehran limited their access.

“Iran deserves no rewards, no bargain deals and no sanctions relief in return for their brutality,” Bennett said in a video statement on Monday. “I call upon our allies around the world: Do not give in to Iran’s nuclear blackmail.”

British Foreign Secretary Liz Truss called the meeting “the last opportunity for the Iranians to come to the table” after a meeting with Israeli Foreign Minister Yair Lapid.

“We want those talks to work,” Truss said. “But if they don’t work, all options are on the table.”

In an interview with NPR broadcast Friday, special envoy for Iran and the negotiator for the United States, Robert Malley, said signs from Iran “are not particularly encouraging.”

In Monday’s briefing, the White House press secretary Jen Psaki said “our objective has not changed.”

“It remains a mutual return to full compliance with the JCPOA. This is the best available option to restrict Iran’s nuclear program and provide a platform to address Iran’s destabilizing conduct,” Psaki said. “We’re working with our European partners in lockstep. And of course, we are going to continue to press toward a diplomatic approach.”

Secretary of State Anthony Blinken has said that “diplomacy is the best way” to deal with Iran’s threat, but he has also said “all options are on the table.”

President Joe Biden has pledged to rejoin the nuclear deal, which President Barack Obama brokered when Biden was vice president.