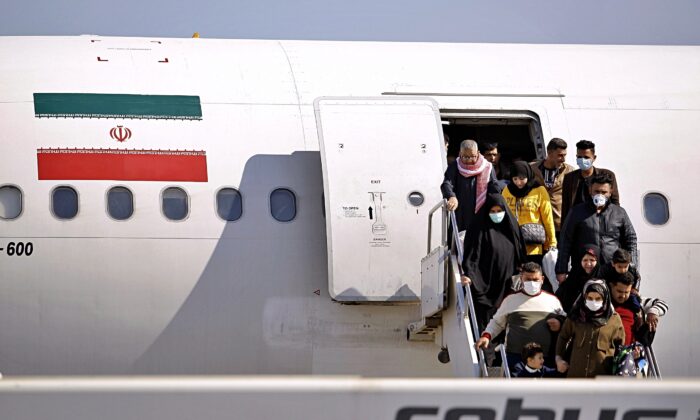 Passengers disembarking from an Iranian plane in the airport in Najaf, Iraq, on Feb. 21, 2020. (Anmar Khalil/AP Photo)
CCP Virus

Iran Raises Death Toll From New Virus to 8, Infections to 43

TEHRAN, Iran—Iran’s health ministry raised Sunday the death toll from the new virus to 8 people in the country, amid concerns that clusters there, as well as in Italy and South Korea, could signal a serious new stage in its global spread.

The outbreak in Iran has centered mostly on the city of Qom, but spread rapidly over the past few days to people in four other cities, including the capital, Tehran.

Across the country in 10 provinces, authorities shuttered schools for at least two days starting on Sunday, and Tehran University suspended classes and shuttered its dormitories for several days. Those who live in student dorms were asked to return to their home towns and continue classes through the internet where possible.

Iran reported its first cases of the virus on Wednesday, announcing that same day that two people had died from the virus in Qom.

Iran’s Health Minister Saeed Namaki told state TV that officials were nearly certain the virus came from China to Qom in central Iran. He also said that among those who’ve died from the virus was a merchant who regularly shuttled between the two countries using indirect flights in recent weeks, after Iran stopped direct passenger flights to China.

He did not say when the merchant had returned from China to Iran nor what steps health officials had taken to quarantine and check on those he’d come into contact with.

Namaki, however, defended the government’s handling of the outbreak, saying it was being “transparent.” He said it would help make face-masks and sanitizers available for Iranians, amid concerns that stocks were running low in the capital’s pharmacies.

Iran is also producing kits for diagnosis of the infection, he added.

Namaki urged people not to visit Qom, which is a major destination for Shiite pilgrims from inside Iran and abroad.

“We obviously do not recommend traveling to Qom and other pilgrimage cities,” Namaki said.

The government has closed down schools and religious seminaries in Qom, where the virus first killed two elderly patients last week. Schools and some universities in Tehran and six other cities were also closed for two days starting Sunday. Football matches and shows in movie theaters were further suspended, and authorities have begun sanitizing Tehran’s metro, which is used by some 3 million people, and public transportation cars in the city on a daily basis.

Iran has also set up 36 screening stations at different ports of entry to the country to check for possibly infected travelers, he added.

Iraq and Pakistan, which share borders with Iran, have already taken preventive measures to limit the spread of the virus from Iranian travelers.

Officials in the Pakistani province of Baluchistan, which shares a long frontier with Iran, have declared an emergency as they seek to stop the spread of the virus. They have suspended almost all traffic across the Taftan border crossing with Iran there.

Infected travelers from Iran already have been discovered in Lebanon and Canada.

Lebanon’s first case of the new virus was discovered on a flight from the Iranian city of Qom this week.

Saudi Arabia has ordered anyone traveling from Iran to wait at least 14 days before entering the kingdom as it seeks to prevent the spread of the virus to the Muslim pilgrimage sites of Mecca and Medina. It has also barred its residents and citizens from traveling to Iran and China.