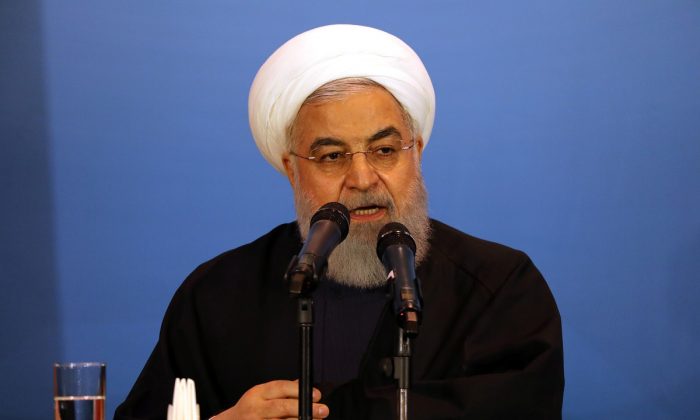 Iranian President Hassan Rouhani warned that European Union troops in the Middle East may be in danger and rejected a proposal for a new “Trump deal” to salvage the 2015 nuclear agreement after European powers announced they would trigger a mediation action over Tehran’s violations.

“Today, the American soldier is in danger, tomorrow the European soldier could be in danger,” Rouhani said in televised remarks, according to a translation from Qatar-backed Al Jazeera and other news outlets.

British Prime Minister Boris Johnson, who also praised President Donald Trump as a great dealmaker, suggested in an interview that Trump replace the 2015 nuclear deal with his own agreement to curb Tehran’s nuclear aspirations. At the same time, France, Germany, and the United Kingdom announced Tuesday they have triggered a formal dispute in response to Iran’s violations.

“We have therefore been left with no choice, given Iran’s actions, but to register today our concerns that Iran is not meeting its commitments under the JCPOA (Joint Comprehensive Plan of Action) and to refer this matter to the Joint Commission under the Dispute Resolution Mechanism,” the ministers of the three European nations said in a statement. In response, Iran’s Foreign Ministry accused European countries of violating the deal for failing to “take tangible and serious action to meet their commitments.”

Trump, on social media, wrote that he agreed with Johnson’s “Trump deal” proposal.

Trump has often criticized the pact which reduced sanctions on the regime, because it gave Iran more breathing room to pursue military action in the Middle East. As a result, Washington pulled out of the deal in 2018 and reimposed the sanctions before announcing new ones last week in response to Iran firing missiles at U.S. troops in Iraq. Following the Trump-approved airstrike to kill Iranian commander Qassem Soleimani in early January, Tehran announced it would reduce its obligations under the JCPOA even further.

Rouhani pushed back against Johnson’s BBC interview remarks, where he said “from the American perspective, it’s a flawed deal … plus it was negotiated by President Obama” before saying that world powers should “replace it with the Trump deal.”

“This Mr. Prime Minister in London, I don’t know how he thinks. He says let’s put aside the nuclear deal and put the Trump plan in action,” Rouhani said Wednesday, according to a translation from Reuters. “If you take the wrong step, it will be to your detriment. Pick the right path. The right path is to return to the nuclear deal.”

Rouhani then issued another veiled threat to U.S. forces in the Middle East.

“American soldiers today are not secure in the region … We don’t want there to be insecurity in the world. We want you to go from here, but not with war. We want you to leave the region intelligently and it’s to your benefit,” he said.