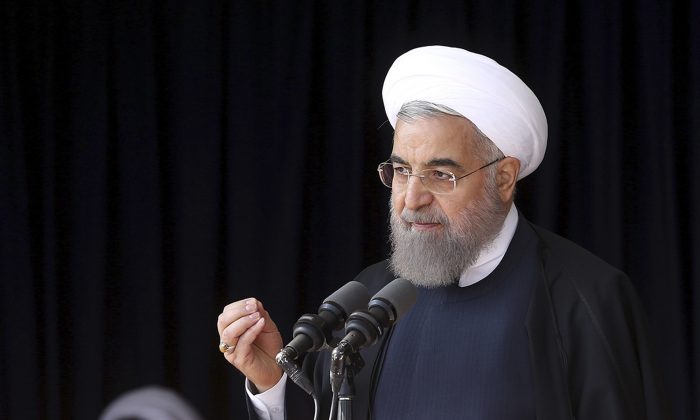 President Hassan Rouhani speaks to a crowd during a visit to the central city of Arak, Iran, on Oct. 23, 2016. (Iranian Presidency Office via AP)
International

TEHRAN, Iran—Iran’s president said on Tuesday that his country will not allow incoming U.S. President Donald Trump to “tear up” Iran’s landmark nuclear deal with world powers and also warned Tehran will react to any extension of American sanctions.

“The U.S. is our enemy,” Rouhani said. “They want to put pressure on us as much as they can.”

Rouhani never mentioned Trump by name in his speech, though he prefaced his remarks with noting that “some man … elected in the U.S.”

On the campaign trail, Trump called the multi-nation deal “catastrophic” and vowed to renegotiate it, without explaining how.

Rouhani also warned Iran “will show a reaction” if outgoing President Barack Obama signs a law extending some of America’s sanctions authority by 10 years. The law, first passed by Congress in 1996 and renewed several times since then, allows the U.S. to sanction companies for doing business with Iran.

Rouhani has described extending the sanctions as a violation of the nuclear deal. The White House deemed the bill unnecessary but said it didn’t violate the international accord.

In Washington, State Department spokesman Mark Toner said any party can leave the nuclear agreement. But he said such a move would be counterproductive because the deal is working.

Iran Demands That Obama Allow US Sanctions to Expire

House Republicans to Obama: Take No More Action on Iran

“It’s not a formal treaty and of course no one can prevent any other party to this agreement from walking away,” Toner told reporters. “The counterargument to that is why would anyone walk away, because it’s effective.”

Toner said it was premature to judge what the incoming Trump administration would do with the Iran deal. He reiterated the Obama administration’s arguments that the accord has cut off all of Iran’s pathways to a nuclear weapon.

Toner also disputed Iran’s claims that it could restart elements of its nuclear program if it perceives the U.S. or any other party to the seven-nation to be in breach.

“The only snapback I’m aware of is obviously the snapback provision that allows us to put back in place very quickly nuclear-related sanctions,” Toner said.