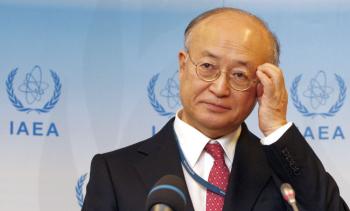 Yukiya Amano chief of the International Atomic Energy Agency holds a press conference after a board of governors meeting in Vienna on March 1. Amano, the new chief of the U.N. atomic watchdog, accused Iran of not cooperating sufficiently with an investigation into its contested nuclear activities. (Dieter Nagl/AFP/Getty Images)
International

Iran ‘not cooperating’ With U.N.

Yukiya Amano, in his first address to the board of the International Atomic Energy Agency (IAEA) since taking over as director-general last December, took a tougher line than his predecessor on Iran's nuclear program.

Amano's announcement, at the 35-nation board meeting of the IAEA in Vienna on Monday, is likely to strengthen calls for tighter sanctions on Iran over its nuclear program—which it insists is entirely peaceful.

The case for further sanctions has been frustrated by apparent resistance by veto-wielding security council members Russia and China.

However, Russia's President Dmitry Medvedev indicated on Monday for the first time, that he might now consider sanctions.

"Unfortunately, everything we have tried to say to the Iranian leaders, all our appeals to them to work on a peaceful nuclear program under the control of the international community, haven't provided any results," Medvedev said at a press conference in Paris.

"We believe that it's not over yet, that we can still reach an agreement," he said. "But if we don't succeed, Russia is ready—along with our partners, as I have already said—to consider the question of adopting sanctions."
Iranian Foreign Minister Manouchehr Mottaki denied that the country had failed to cooperate with the IAEA.

"We have fully cooperated with the agency. This cooperation will continue," he told reporters.

At the time, a leaked report from the IAEA confirmed that Iran had produced its first batch of uranium enriched to a higher purity of 20 percent.

It also suggested that there could exist past or current undisclosed activities related to the development of a nuclear warhead.