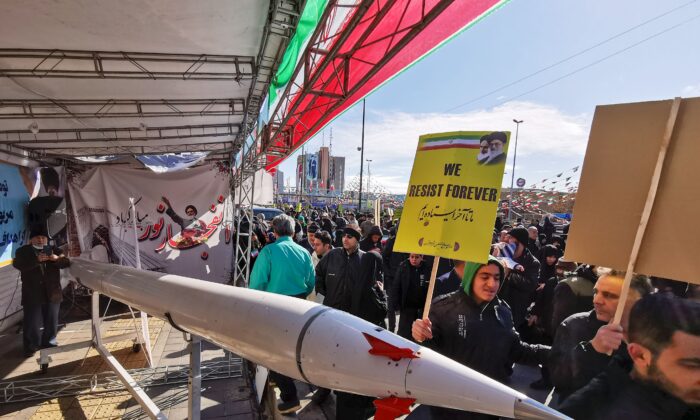 Iranians walk past a replica of a rocket during commemorations marking 41 years since the Islamic Revolution, in the capital Tehran on Feb. 11, 2020. (ATTA KENARE/AFP via Getty Images)
Middle East

Iran Shows Off Two Missiles, Including One Named After Soleimani

The Iranian regime unveiled on Aug. 18 two ballistic missiles, with one named after Qassem Soleimani, the slain Qods Force commander, and the other after Iraqi militia leader Abu Mahdi Al-Muhandis, who was killed along with Soleimani in a U.S. drone strike in Baghdad on Jan. 3.

On the same day, it was reported that Venezuela may be showing interest in buying Iranian missiles.

“The fact that we have succeeded in upgrading the sea-launched cruise missiles over a period of one and a half years, from 300 kilometers to 1,000 kilometers, shows that the country is on the path of production and self-sufficiency in this field,” Rouhani said in a statement, adding that Iran’s defense industry has risen to 14th place globally from 23rd in the past six years.

Rouhani praised the naming of the missiles and said they would help fight ISIS terrorists. The footage and pictures in the Iranian media of the missile “Shahid Haj Qassem” show on the missile the Persian words mushak-e baalistik-e haaj qasim, which literally means “in honor of the martyr Soleimani who had been to Haj.”

The Haj is the pilgrimage to Mecca required of all Muslims.

“These inaugurations show the success of the country in the field of production of strategic, deterrent and defense weapons, and the country is developing along with the world defense industry,” Rouhani said.

Iran’s Message to the US

Experts say that through the naming of the two ballistic missiles for the generals, Iran seeks to send multiple messages to the United States.

The Iranian regime has officially named Soleimani as Shahid Qassem Soleimani; a shahid or martyr is the highest “honorific bestowed in Shia martyrology,” Burzine Waghmar, a faculty member of the Centre for Iranian Studies, SOAS University of London, told The Epoch Times in an email.

“And that Tehran has not, and will not, forget his slaying. Iran may be on the back foot for now, but they will avenge him whenever it will be possible to do so in the future, near or distant,” Waghmar said. “This remains Khamenei’s avowed intention for so long as he is still around, even if ailing, with his cancer in remission.”

Iran is also trying to project a position of strength by the launch, James Phillips, a senior research fellow for Middle Eastern affairs at the Heritage Foundation, told The Epoch Times in an email.

“Iran is trying to project an image of military strength by unveiling new weapons that it often exaggerates the capabilities of to impress its friends and foes,” Phillips said.

Iran possesses the most diverse and the largest missile arsenal in the Middle East, and its large number of ballistic and cruise missiles can strike as far as Israel and southeastern Europe, according to Center for Strategic and International Studies’ (CSIS) Missile Defense Project.

“Such developments have made Iran’s missile forces a potent tool for Iranian power projection and a credible threat to U.S. and partner military forces in the region. Iran has not yet tested or deployed a missile capable of striking the United States but continues to hone longer-range missile technologies under the auspices of its space-launch program,” CSIS says.

Phillips said Iran wants to convey to the United States that by the launch of the two missiles and by naming them for the “martyred” commanders, that unlike what it had expected, somehow Soleimani’s elimination “strengthened the regime, rather than weakening it.”

Iran’s Message to the Middle East

Waghmar said that, through the launch of “Shahid Haj Qassem,” Iran also wants to send a strong message to the U.S.’s ally Israel.

“Second, and more crucial, is that this missile, whose range takes in Jerusalem, is a stark reminder to Israel, deemed America’s regional proxy, that Tehran’s IRGC (Revolutionary Guards to which Soleimani belonged) is bolstering its Shia regional proxy, the Lebanese Hezbollah. This is a foregone conclusion in Tel Aviv and Beirut,” Waghmar said.

He said the Iranian regime is flexing muscles at a time when it’s facing many domestic concerns and is probably trying to prove its credibility to its domestic and regional supporters.

“True, GCC [Gulf Cooperation Countries] members get the jitters too, especially Saudi Arabia and Bahrain, but this upgraded addition to its arsenal is being flexed at a time by an increasingly beleaguered, unpopular regime confronting one too many domestic challenges: COVID-19; the brazen shooting and slaying of its own Iranian denizens on that Ukrainian air carrier (not forgotten by many still mourning, though COVID-19 has been a convenient, temporary distraction for the regime); and an economy reeling under inflation and sanctions,” Waghmar said.

According to CSIS, Iran has also been a steady supplier of rockets and missiles to its various proxies such as Hezbollah and Syria’s al-Assad, Yemen’s Houthi rebels, and Shiite militia groups in Iraq. Waghmar said through the display of the new weapons, Iran is trying to motivate its various Middle East proxies.

“Thirdly, this missile’s announcement also comes on the heels of the Beirut port disaster and that the Lebanese establishment (Shia, Sunni plus Maronite Christians) has drawn universal ire from all Lebanese at home and the diaspora. The sclerotic home rule cannot just be blamed on Christians and Sunnis. The Shia Hezbollah is just as loathed in several quarters, and Tehran is also sending a message of solidarity to firm them up given the barrage of brickbats all political stakeholders are facing currently nationally,” Waghmar said.

About Selling Missiles to Venezuela

On the same day when Iran put the two missiles on display, Colombian President Ivan Duque claimed that Nicolas Maduro’s regime in Venezuela wants to buy Iranian missiles. While Venezuela’s Foreign Minister Jorge Arreaza claimed that to be “fiction,” Maduro later said in a TV broadcast that it’s a “good idea.”

Wilder Alejandro Sanchez, a defense and geopolitics analyst based in Washington, said in an email to The Epoch Times: “Should this sale occur, it would cement Iran-Venezuela relations, which are already fairly strong. The two governments are considered pariahs by the international community, and the US regards them as security threats in their respective regions. While the sale of missiles from Iran to Venezuela would not affect the United States itself, it is a security concern for Colombia, a key ally of Washington in Latin America.”

Sanchez says the Iranian regime is also viewed as a threat in Latin America by U.S. allies because of its support to Hezbollah, which carried out attacks in Argentina in 1992 and 1994.