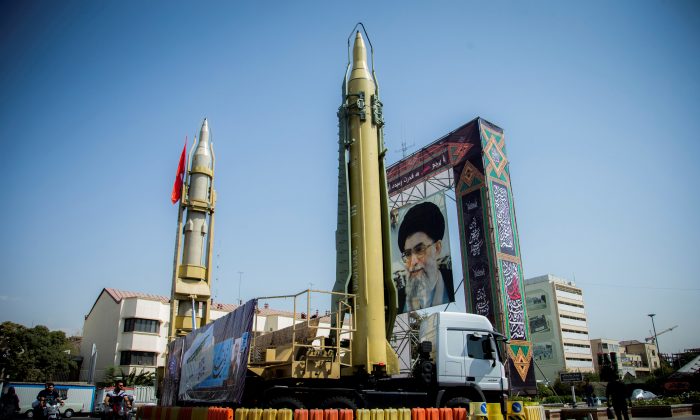 A display featuring missiles and a portrait of Iran's Supreme Leader Ayatollah Ali Khamenei is seen at Baharestan Square in Tehran, Iran on September 27, 2017. (Nazanin Tabatabaee Yazdi/TIMA via Reuters)
By Jack Phillips

Iran will no longer abide by the limits of the 2015 nuclear deal intended to curb its burgeoning nuclear program, according to a statement from the regime.

“The Islamic Republic of Iran will end its final limitations in the nuclear deal, meaning the limitation in the number of centrifuges,” the statement reads. “Therefore Iran’s nuclear program will have no limitations in production including enrichment capacity and percentage and number of enriched uranium and research and expansion.”

A government spokesman said Iran would not respect any limits set down in the 2015 agreement, CNBC reported. It means there will be no more restrictions on uranium enrichment, the number of centrifuges, and research and development, reported Iranian state television.

The announcement came following an emergency meeting held by Iran’s National Security Council on Sunday over its nuclear policy in the aftermath of the United States’ killing of Iranian Gen. Qassem Soleimani in Baghdad, reported The New York Times.

The regime said Iran would still cooperate with the International Atomic Agency if sanctions were lifted, according to the NY Times.

The move also follows escalating tensions and threats made by Iranian and U.S. officials over the weekend.

“Iran is talking very boldly about targeting certain USA assets as revenge for our ridding the world of their terrorist leader who had just killed an American, & badly wounded many others, not to mention all of the people he had killed over his lifetime, including recently hundreds of Iranian protesters,” President Donald Trump wrote on Twitter on Saturday

Several Iranian officials, including top Supreme Leader adviser Gen. Hossein Dehqan, claimed the United States “started the war” and said the “only thing that can end this period of war is for the Americans to receive a blow that is equal to the blow they have inflicted. Afterward, they should not seek a new cycle.”

Days before Soleimani’s death, Iranian President Hassan Rouhani said his country is working on the development of uranium enhancement centrifuges, which may have violated the 2015 agreement. Tehran is testing IR-9 centrifuges that convert mined uranium into nuclear fuel, he said, CNN reported. Iran, however, has been accused of trying to enrich uranium to build a nuclear weapon.

And in early November, Iran’s nuclear chief, Ali Akbar Salehi, said the country is operating 60 IR-6 advanced centrifuges in violation of its 2015 atomic deal with other world powers, according to the state-run Tasnim News Agency.

“Today, we are witnessing the launch of the array of 30 IR-6 centrifuges,” Salehi, who heads Iran’s Atomic Energy Organization, told state television as reported by Reuters at the time. “Iran now is operating 60 IR-6 advanced centrifuges. It shows our capacity and determination.”

The nuclear agreement ended many economic sanctions on Tehran for its promise to use nuclear power for peaceful purposes.