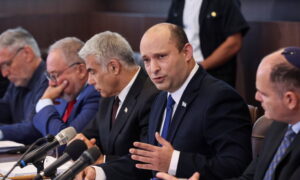 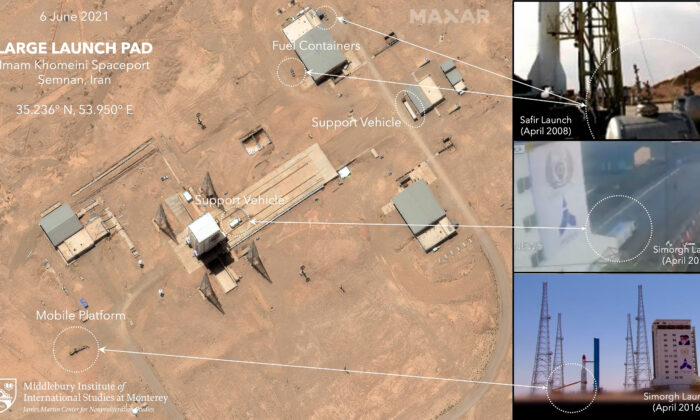 This satellite image shows preparation at the Imam Khomeini Spaceport in Iran's Semnan province, before what experts believe was the launch of a satellite-carrying rocket, Iran, on June 6, 2021. (©2021 Maxar Technologies, James Martin Center for Nonproliferation Studies at Middlebury Institute of International Studies via AP)
Middle East

Iran Likely Had Failed Rocket Launch, Preparing for Another

DUBAI, United Arab Emirates—Iran likely conducted a failed launch of a satellite-carrying rocket in recent days and now appears to be preparing to try again, the country’s latest effort to advance its space program amid tensions with the West over its tattered nuclear deal.

Satellite images, a U.S. official, and a rocket expert all confirmed the failed launch, earlier this month, at the Imam Khomeini Spaceport in Iran’s Semnan province. The attempt comes as Iran’s space program has suffered a series of high-profile losses, while its paramilitary Revolutionary Guard runs its own parallel program that launched a satellite into orbit last year.

Iran’s Telecommunications Minister Mohammad Javad Azari Jahromi later Wednesday denied Tehran had a failed satellite launch, but offered no explanation for the activity at the spaceport. Iran’s mission to the United Nations did not immediately respond to a request for comment early Wednesday.

Satellite photos from Planet Labs Inc. and Maxar Technologies show preparations at the spaceport on June 6. Those images include what appears to be fuel tanks alongside a massive white gantry that houses a rocket, while scientists fuel it and prepare for launch. Before the launch, workers tow the gantry away to expose the rocket.

The number of fuel tanks, based on their size, appear to have been enough to fill the first and second stages of an Iranian Simorgh rocket, said Jeffrey Lewis, an expert at the James Martin Center for Nonproliferation Studies at the Middlebury Institute of International Studies. The Simorgh is a satellite-carrying rocket that has been launched from that same area of the spaceport, he said.

Later satellite images on June 17 showed a decrease in activity at the site. Lewis said analysts believe Iran launched the rocket at some point in that window.

“Nothing had blown up. There wasn’t a giant stain—like they had dumped the fuel—and the vehicles had kind of just moved around,” he said. “The overall level of activity at the site was much lower. So to our mind, that looked like a launch.”

CNN, which first reported on the failed launch, quoted Pentagon spokesman Lt. Col. Uriah Orland saying that “U.S. Space Command is aware of the Iranian rocket launch failure which occurred early June 12.” Orland did not elaborate. The Pentagon and U.S. Space Command did not immediately respond to a request for comment early Wednesday from The Associated Press.

It wasn’t immediately clear why Iran would have picked June 12 for a launch as Tehran typically schedules such launches for national commemorations. However, it did come in the run-up to Iran’s presidential election last week, in which the Islamic Republic had hoped to boost turnout.

On Sunday, a new satellite image from Planet Labs showed renewed activity at the site. The image shows a mobile platform previously used to secure a Simorgh rocket at the gantry, a support vehicle seen at previous launches, and a new line of fuel containers lined up at the site. Lewis said the equipment suggests that another launch is imminent.

Over the past decade, Iran has sent several short-lived satellites into orbit and in 2013 launched a monkey into space. The program has seen recent troubles, however. A failed launch this month would be the fourth in a row for the Simorgh program. A separate fire at the Imam Khomeini Spaceport in February 2019 also killed three researchers, authorities said at the time.

A rocket explosion in August 2019 drew even the attention of then-President Donald Trump, who later tweeted what appeared to be an image of the launch failure. The successive failures raised suspicion of outside interference in Iran’s program, something Trump himself hinted at by tweeting at the time that the United States “was not involved in the catastrophic accident.” But Lewis said such failures are common, especially when trying to put objects carefully into orbit around the Earth.

Meanwhile, the Guard in April 2020 revealed its own secret space program by successfully launching a satellite into orbit. The head of the U.S. Space Command later dismissed the satellite as “a tumbling webcam in space” that wouldn’t provide Iran vital intelligence—though it showed Tehran’s ability to successfully get into orbit.

The launch comes after the landslide election of Iranian President-elect Ebrahim Raisi, the country’s hard-line judiciary chief tied to the mass execution of thousands in 1988. The vote saw the lowest turnout in a presidential election since Iran’s 1979 Islamic Revolution.

Raisi will take over from Iran’s outgoing President Hassan Rouhani, a relative moderate who guided Tehran into its 2015 nuclear deal with world powers. Trump unilaterally withdrew America from the accord in 2018. Diplomats in Vienna now are negotiating a way for both Iran and the United States to re-enter the deal, which saw Iran agree to limit its nuclear enrichment in exchange for the lifting of economic sanctions.

The United States has alleged such satellite launches defy a UN Security Council resolution and called on Iran to undertake no activity related to ballistic missiles capable of delivering nuclear weapons.