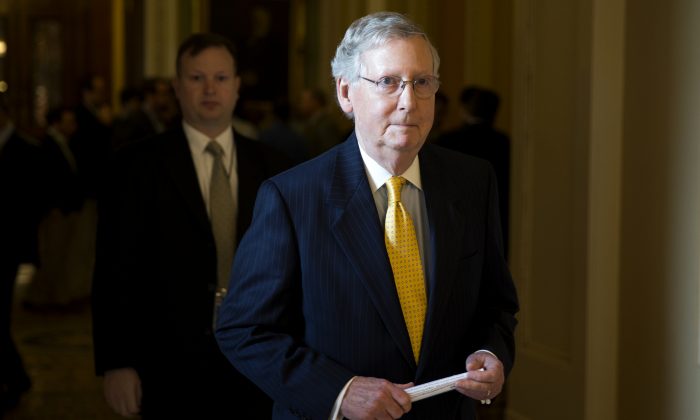 WASHINGTON—Republicans in control of Congress want a say on negotiations to ease sanctions against Iran in exchange for concessions on nuclear research and development, and a bipartisan accomplishment signed into law to showcase an ability to govern sensibly.

When it comes to talks with Iran, President Barack Obama insists on having the final word.

Both sides will get their wish in legislation that cleared the Senate on Thursday, a classic compromise that enhances Congress’ prerogatives without seriously challenging the president’s constitutional authority to conduct foreign policy.

Under the measure, which now goes to the House, Congress will have time to vote to reject any deal before sanctions are lifted. And Obama retains the right to veto lawmakers’ disapproval.

Unless Democrats defect the administration in droves, his veto will stand and the agreement will go into effect. The longer-term ramifications of Iran’s quest to obtain nuclear weapons, Israel’s survival, and the future of the Middle East will be debated at length in the 2016 presidential campaign to pick Obama’s successor.

“I agree that it is of paramount importance to give Congress its proper role in an international agreement of this matter,” Texas Sen. Ted Cruz said this week in remarks on the Senate floor.

But as it stands, “this legislation is unlikely to stop a bad Iran deal,” the Republican presidential contender said, previewing the struggle in Congress later this year once the agreement is submitted for a vote.

He wanted to require Congress to vote affirmatively in favor of any deal before it could take effect, giving lawmakers, not the administration, the final say. That was a non-starter for the White House and as a result never was put to a vote in the Senate — one of many proposed changes that met the same fate for the same reason.

Cruz wasn’t the only presidential hopeful to inject himself into the three weeks of maneuvering on legislation that culminated in Thursday’s 98-1 vote.

Sen. Marco Rubio, R-Fla., laid down a marker with a proposed change requiring Iran to recognize the right of Israel to exist as a precondition for the easing of sanctions. He accused Obama of “constant appeasement” of Iran during the negotiations, and said the emerging agreement would mark a step toward war.

But his amendment, too, threatened to destabilize the bipartisan legislation. Given domestic politics, Democrats would have had a difficult time voting against the proposal and its approval would have prompted the president to withdraw his reluctant support for the bill. It was jettisoned.

In the end, Rubio, like Cruz, voted for the measure. He said that “at a minimum it creates a process whereby the American people through their elected representatives can debate an issue of extraordinary importance.”

That was the same view that Senate Majority Leader Mitch McConnell of Kentucky expressed. A fierce critic of Obama’s policies, he opened his daily remarks on the Senate floor on Thursday by noting “it’s good to see that the Senate will soon be passing another important piece of bipartisan legislation.”

That’s an over-arching political objective for the party, which Democrats constantly accuse of being beholden to an uncompromising far-right wing.

As leader, McConnell took no obvious steps to force a vote on the amendments by Rubio, Cruz and other fellow Republicans that Democrats and the White House found most objectionable. He criticized the emerging deal, but said the legislation “offers the best chance for our constituents, through the Congress they elect, to weigh in on the White House’s negotiations with Iran.”

Others found much to praise.

Sen. Bob Corker of Tennessee, chairman of the Senate Foreign Relations Committee, said the legislation marked the first example in years of Congress “asserting itself and taking power back that had already been granted to the president.”

Sen. Ben Cardin of Maryland, the panel’s senior Democrat, called the bill a model of bipartisanship on an issue of high importance. “This legislation makes no judgment on the substance of an agreement with Iran but gives Congress a chance to review any accord that would suspend congressional sanctions,” he said.

White House spokesman Eric Shultz said Obama would sign the bill in its current form, adding the White House would oppose it if changes were made in the House “that would endanger a deal coming together that prevented Iran from obtaining a nuclear weapon, that we’d oppose it.”

Cruz, arguing that the emerging deal does nothing of the sort, saw things somewhat differently.

“No wonder the White House has lifted its objections to this legislation,” he said. “All the president would have to do to force a bad Iran deal on America is hold 34 senators in the Democratic party, or 145 members” of the House, the number necessary to sustain a veto.