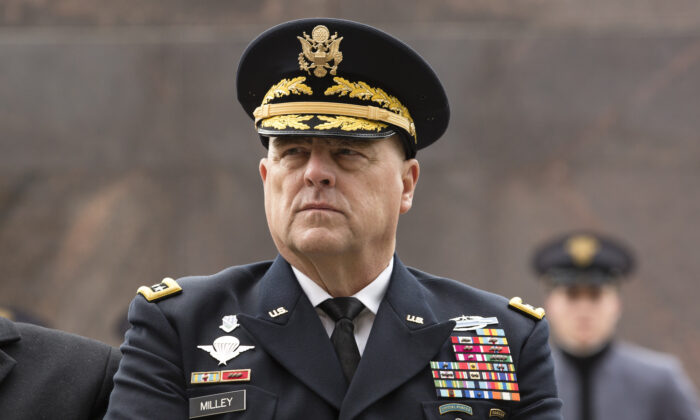 Iran Intended to Kill US Personnel in Missile Attack: Top US Military General

Chairman of the Joint Chiefs of Staff, U.S. Army General Mark A. Milley, the U.S. military’s top uniformed official, said that while Iran’s missile attack on Wednesday didn’t result in any casualties, he believes it was intended to kill U.S. personnel and cause significant damage at the Al Asad Air Base.

Iran on Wednesday fired a barrage of missiles at two Iraqi military bases—Al Asad Air Base in Anbar province and Erbil in the Kurdish autonomous region—both of which host American forces, in an apparent response to the recent killing of Iran’s top military general Qassem Soleimani on Jan. 3 that was ordered by President Donald Trump.

Speaking to reporters at a Pentagon briefing, Milley and Defense Secretary Mark Esper appeared to dismiss suggestions that Iran did not intend to kill Americans with its missiles, reported Military.com. Both also indicated they will not draw conclusions as to whether Iran would carry out additional attacks, adding that professional intelligence analysts are working on a final assessment of the latest strikes from Iran.

Esper said that he believes the missiles “were intentional, given what was hit—the aim points,” the news outlet reported.

Meanwhile, Milley noted the missiles had 1,000 to 2,000-pound warheads on them, each with significant explosive power and “kill radius,” Reuters reported.

“The points of impact were close enough to personnel and equipment … that I believe, based on what I saw and what I know, is that they were intended to cause structural damage, destroy vehicles and equipment and aircraft, and to kill personnel. That’s my own personal assessment,” Milley said. “But the analytics is in the hands of professional intelligence analysts. So they’re looking at that.”

Milley noted that bases like Al Asad have scatter plans, bunkers, and protective gear to help protect forces that come under attack. He commended the military commanders on the ground for taking actions that ensured the safety of the troops.

Esper said that Iran launched a total of 16 ballistic missiles from three locations in Iran into Iraq, four of which failed in flight.

According to the Pentagon, at least 11 of the 16 missiles hit the Al Asad Air Base about 175 miles from the Iraq-Iran border, while at least one hit a military installation near Irbil, some 60 miles from the border with Iran. Both locations held American and coalition forces, including from the United Kingdom, Denmark, and Canada.

Esper and Milley’s understandings of the strikes as relayed to reporters on Wednesday stood in contrast with a number of news reports earlier that day that suggested Iran “calibrated” its attack with the intention to cause minimal harm to American troops.

Trump on Wednesday morning said in a televised address from the White House that Americans should be “extremely grateful and happy” that no Americans were harmed in the attack.

“We suffered no casualties, all of our soldiers are safe, and only minimal damage was sustained at our military bases,” Trump said.

“Our great American forces are prepared for anything. Iran appears to be standing down, which is a good thing for all parties concerned and a very good thing for the world,” Trump added. “No American or Iraqi lives were lost because of the precautions taken, the dispersal of forces, and an early warning system that worked very well. I salute the incredible skill and courage of America’s men and women in uniform.”

“We do not seek escalation or war, but will defend ourselves against any aggression,” Zarif wrote on Twitter on Wednesday.

Soleimani was considered the architect behind the Iranian regime’s foreign influence activities in the Middle East as head of the Quds Force, an elite unit within Iran’s Islamic Revolutionary Guards Corps (IRGC). The IRGC is tasked with Iran’s extra-territorial military operations, including activities to expand Iranian influence in Syria and rocket attacks on Israel. The United States designated the IRGC as a terrorist group in April 2019.

The Pentagon said in a statement on Jan. 2 that Soleimani was “actively developing plans to attack American diplomats and service members in Iraq and throughout the region,” and that he and the Quds Force “were responsible for the deaths of hundreds of American and coalition service members and the wounding of thousands more.”