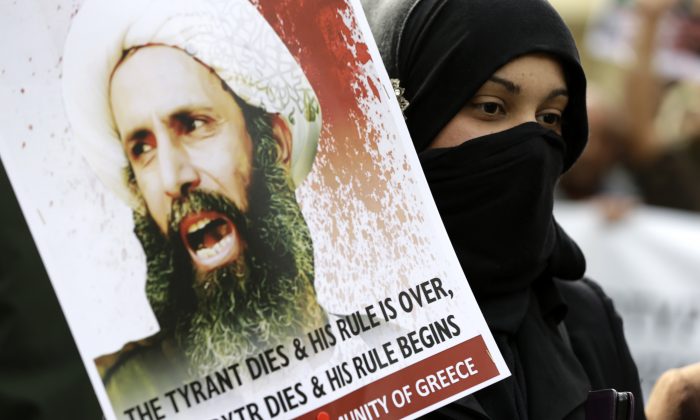 A Shia Muslim who lives in Greece takes part in a rally against the execution of cleric Sheikh Nimr al-Nimr, outside Saudi Arabia's Embassy in Athens on Jan. 6, 2016. (AP Photo/Thanassis Stavrakis)
Middle East

TEHRAN, Iran—Iranians held mass protests Friday across the Islamic Republic, angered by Saudi Arabia’s execution of a Shiite cleric that has enflamed regional tensions between the Mideast rivals.

The crisis has seen Saudi Arabia sever ties with Iran after crowds of protesters in Iran attacked two of its diplomatic posts. Those assaults came after Saudi Arabia executed Sheikh Nimr al-Nimr, a prominent opposition Shiite cleric, on Jan. 2.

After Friday prayers in Tehran, thousands of worshippers joined the rally, carrying pictures of al-Nimr and chanting “Death to Al Saud,” referencing the kingdom’s royal family. They also chanted “Down with the U.S.” and “Death to Israel,” traditional Iranian slogans at protests.

The rally in Tehran lasted some 40 minutes and took place in an outdoor space at the Mosalla Mosque, the main site for Friday prayers in Tehran.

Iranian state media reported similar protests taking place in other Iranian cities and towns. In Bahrain, more protests were planned Friday, while Shiites across the greater Mideast have rallied throughout the week over al-Nimr’s execution.

The protests come after Iran claimed Thursday that a Saudi-led airstrike the previous night had hit the Iranian Embassy in Sanaa, citing Iran’s Foreign Ministry. However, an Associated Press reporter who reached the site just after the announcement saw no damage to the building, which sits in a neighborhood near a presidential palace that’s seen many previous strikes.

Iran vowed to file a report about their claim to the United Nations, while the Saudi military issued a statement through the kingdom’s state news agency, dismissing the allegation as false.

In eastern Saudi Arabia, the home of al-Nimr and much of the kingdom’s roughly 10 to 15 percent Shiite population, Shiites held a memorial service for the cleric Thursday night. It wasn’t a funeral, as the sheikh’s brother has said Saudi authorities had already buried his body in an undisclosed cemetery.

The service ended peacefully, despite gunfire echoing in the night in the region over the last week. On Friday, the state-run Saudi Press Agency said that a man complained of being kidnapped at gunpoint by a gang and beaten in eastern Saudi Arabia. It quoted police as saying an investigation was ongoing.