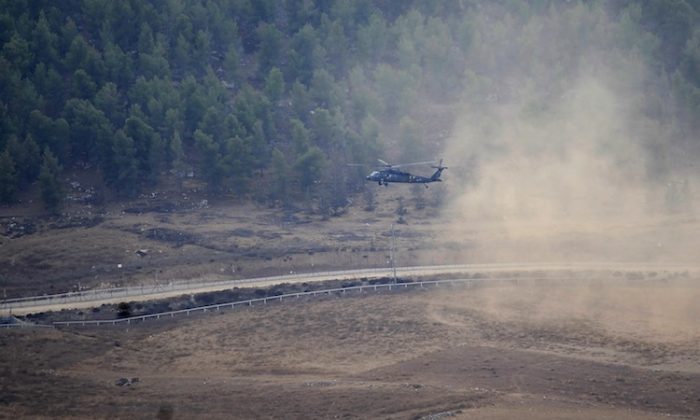 An Israeli army helicopter searches for the remains of an unarmed and unidentified drone in the northern Negev on Oct. 5, where the Israeli air force shot it down after it entered the country's airspace from the Mediterranean Sea. (David Buimovitch/AFP/GettyImages)
Middle East

Iran has acquired data that was obtained by a Hezbollah drone that flew over Israel earlier this month, an Iranian politician said Monday.

“These aircraft transmit their images online and we are now in possession of the images of [Israeli] restricted areas,” Esmaeel Kosari, the head of the Iranian Parliament’s defense commission, was quoted as saying by Press TV, a state-run broadcaster.

Israel has downplayed the unmanned drone’s foray into its territory, saying that they noticed it long before it could gain any sensitive information and later shot it down when it was not near a residential area.

Hezbollah leader Hassan Nasrallah confirmed on Oct. 11 that the drone had been commissioned by his militant Lebanese political party.

Defense Minister Ahmad Vahidi also told the Tehran Times that Iran has better drones than the one Hezbollah used.

The Hezbollah drone “is not the newest Iranian technology,” he said.

After the drone went into Israel and was shot down, Hezbollah and Iranian officials began using the event as a platform to boast about their capabilities.

Israel has threatened to bomb Iranian nuclear sites if sanctions and talks fail to stop the Islamic Republic from continuing with nuclear activities. The United States and other Western countries say Iran has a program for building a nuclear weapon, but Iran has denied such claims.