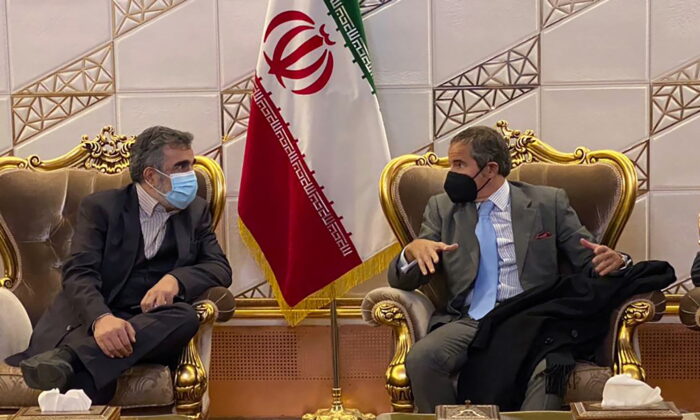 Iran Enriches to 20 Percent With New Centrifuges at Fortified Site

TEHRAN, Iran—Iran announced Sunday that it has begun enriching uranium up to 20 percent using sophisticated centrifuges at its underground Fordo nuclear plant, state TV reported, an escalation that comes amid a standoff with the West over its tattered atomic deal.

That Tehran is enriching uranium up to 20 percent purity—a technical step from weapons-grade levels of 90 percent—with a new set of its most advanced centrifuges at a facility deep inside a mountain deals yet another blow to the already slim chances of reviving the accord.

Behrouz Kamalvandi, a spokesman for Iran’s Atomic Energy Organization, said uranium enriched to 20 percent was collected for the first time from advanced IR-6 centrifuges on Saturday. He said Iran had informed the U.N. nuclear watchdog about the development two weeks ago.

Centrifuges are used to spin enriched uranium into higher levels of purity. Tehran’s 2015 nuclear agreement with world powers had called for Fordo to become a research-and-development facility and restricted centrifuges there to non-nuclear uses.

Iran had previously told the International Atomic Energy Agency (IAEA), the U.N.’s nuclear watchdog, that it was preparing to enrich uranium through a new cascade of 166 advanced IR-6 centrifuges at its underground Fordo facility. But it hadn’t revealed the level at which the cascade would be enriching.

The IAEA told The Associated Press that it had verified on Saturday that Iran was using a set-up that allowed it to more swiftly and easily switch between enrichment levels.

In a report to member states, Director General Rafael Grossi described a system of “modified sub-headers,” which he said allowed Iran to inject gas enriched up to 5 percent purity into a cascade of 166 IR-6 centrifuges for the purpose of producing uranium enriched up to 20 percent purity.

Iran did not comment on the latest IAEA finding.

Nuclear talks have been at a standstill for months. The U.S. special envoy for Iran, Robert Malley, described the latest round of negotiations in Qatar as “more than a little bit of a wasted occasion.”

The IAEA reported last month that Iran has 43 kilograms of uranium enriched to 60 percent purity—a short step to 90 percent. Nonproliferation experts warn that’s enough fissile material for one nuclear weapon if Iran chose to pursue it.

However, Iran still would need to design a bomb and a delivery system for it, likely a months long project.

Iran insists its program is for peaceful purposes, though U.N. experts and Western intelligence agencies say Iran had an organized military nuclear program through 2003.

Former President Donald Trump withdrew the United States from the nuclear deal in 2018 and reimposed crushing sanctions on Iran. Other Western powers, meanwhile, continued to try to revive the deal. Iran responded by massively increasing its nuclear work, growing its stockpile of highly enriched uranium and spinning advanced centrifuges banned by the accord.

Iran’s adversary Israel has long opposed the nuclear accord, saying it delayed rather ended Iran’s nuclear progress and arguing that sanctions relief empowered Tehran’s proxy militias across the region.

On Sunday, Israeli Prime Minister Yair Lapid called on the United Nations to re-impose multilateral sanctions on Iran—a bid that was met with stiff opposition.

“The response of the international community must be decisive: to return to the U.N. Security Council and activate the sanctions mechanism at full force,” Lapid, who is serving as caretaker leader, told his Cabinet. “Israel, for its part, maintains full freedom to act, diplomatically and operationally, in this fight against Iran’s nuclear program.”